What are Aliphatic Hydrocarbons? Discuss their properties in detail.

What are Aliphatic Hydrocarbons? Discuss their properties in detail.

An aliphatic compound may be defined as a hydrocarbon compound that consists of a carbon and hydrogen molecule joined in a straight chain. It is interesting to note that the term aliphatic has been derived from the Greek term ‘Aleiphar,’ which is defined as ‘fat.’ These structures can also be found together in branched trains and non-aromatic rings. These compounds may exist in a saturated state as a hexane or alkane or they may exist in an unsaturated state as hexene and various other alkenes. The simplest of these aliphatic hydrocarbons can be identified as methane, whose chemical formula is CH4. However, it may occur that other elements are bound to the carbon atoms in addition to hydrogen. These may include oxygen, nitrogen, sulfur and even chlorine. It is interesting to note that the majority of aliphatic hydrocarbons are considered to be flammable. Moreover, it is generally accepted that the aromatic hydrocarbon, which include benzene, are more threatening than the aliphatic hydrocarbon, namely sulphuric and glucuronic acids. These hydrocarbons are easily extracted with the help of PFE by utilizing organic and aqueous solvents. In fact, when water is converted into the form of highly heated steam, it may also be effectively used in order to extract aliphatic hydrocarbons. Furthermore, it can also be noticed that when these aliphatic hydrocarbons are placed strategically in a straight chain, the numerous carbon atoms are never witnessed to be bonded to more than two carbon atoms at a given time. On the other hand, a non-aromatic hydrocarbon can be identified to be cyclic and they are also not classified to be of a stable nature as well. An aromatic hydrocarbon, which happens to be cyclic, can also be identified to be stable.

When one deciphers the properties of these aliphatic hydrocarbons, three classifications may be identified. They include alkanes, alkenes and alkynes. Alkanes generally possess the general formula CnH(2n+2), where n happens to represent the number of carbon atoms located in a given structure. These possess only a singular bond, which is identified as sigma bonds. These also fall under the category of saturated hydrocarbons. Secondly, alkenes have a general formula of CnH(2n). These structures consist of at least a single double bond. Thirdly, alkynes posses the general formula CnH(2n-2) and possesses at least one triple bond. In addition, the cyclic hydrocarbons can further be identified and classified into three different parts. They include Cycloalkanes Hydrocarbons, Cycloalkenes Hydrocarbons and Aromatic Hydrocarbons. It must also be comprehended that aliphatic hydrocarbons consist of open chains. Also, because of the valence configuration of these carbons, there are numerous amounts of alkane isomers that are in existence. These are then separated into a linear and branched structure. Moreover, these alkanes are utilized in various numbers of industrial applications. They are also discovered in natural gases and even petroleum. In fact, due to their flammable nature, these aliphatic hydrocarbons are most often used as fuels. Some of the examples of these aliphatic fuels are methane, liquefied natural gas and even acetylene.

It must also be noted that these alkanes are in general stable compounds and thus does not react in normal situations. Applying any kind of external heat enables one to crack larger and more complex alkanes and consequently produce smaller and thus more useful alkanes as well as alkenes. The most essential reaction that these alkenes go through is combustion. These alkanes can most definitely be burned in the presence of oxygen in order to build carbon dioxide, water and additionally energy. In the situations where limited oxygen is available, the by-products of the combustion include carbon monoxide, water and energy. It is also noted that many of these hydrocarbons are freely available in nature. These structures are present in trees and plants in addition to fossil fuels. These hydrocarbons are derived through the chemical degradation of various fats and oils. Thus, the terms aliphatic and aromatic describe compounds that are distinguishable on the lines of structure rather than that of origin.

Aliphatic hydrocarbon can be best explained and identified through various examples 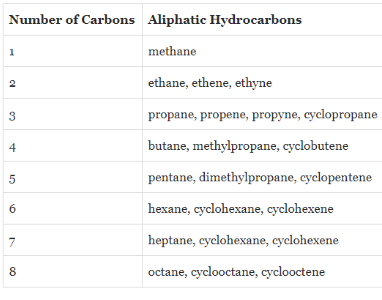 From the table is can be seen that methane, ethane, propane and hexane are also examples of aliphatic hydrocarbons. 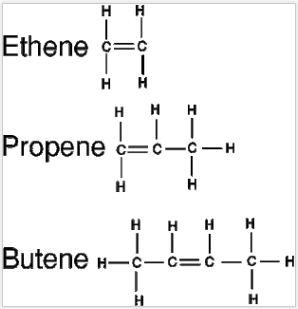 View All Reviews
Aliphatic Hydrocarbons has been added in your library.