Aggregation is said to be the process of combining certain things. This can be much more explained as the fact that putting certain things together so that it can be easy for referring them collectively. The concept of aggregation may be explained with the help of an easy example such as think about the phone numbers on your cell phone. They may be referred individually that is your mother's number, your best friend's number, etc. However, it's easier to think of them collectively, as your phone number list. It is significantly important to realize that each member present within the aggregation continues to have the properties of the whole aggregation. In other words, each phone number in the list remains a phone number. The process of combining them has not altered them in any way.

Aggregation is generally used for making reference to a group of items as an individual whole. This is depicted to be the main purpose of the aggregation. Moreover, this also tends to provide another significant benefit that it simplifies the access of the individual terms as it can be referred a single item for the other whole items. Let us consider an array. This array is depicted to be an aggregating mechanism that creates the group of the ordered entities where each of the individual entries are referred by the index present with the value of each array.

Moreover, aggregation is depicted to be a path that is involved with the composing of the different abstractions collectively in describing a class. For example, a car class may be well stated to contain the other classes that are likely to be the engine class, seat class, wheels class and many more. The car class may tend to define an engine class as one of its attributes. A concrete occurrence of a car class will possess its attribute as engine which will hold a concrete instance of engine class. Let us take an example where two instances of a car class fiat and ford will possess their engine attributes which will further hold objects of a ford engine and fiat engine respectively.

The car object is an aggregation of wheels, seat, engine and the other objects. 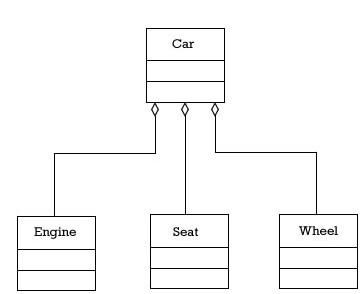 Moreover the concept of aggregation is used in the database Management system in the field of computer science. The data aggregation is depicted to be a process in which the information is collected as well as expressed in a summary format that puts up the statistical analysis. A common aggregation procedure is to get more information about particular groups based on specific variables such as age, profession, or income. The information about such identified groups can thereafter be used for personalization of the Web site to choose content as well as advertising likely to appeal to an individual belonging to one or more groups for which data has been collected. For example, a website that is associated with the selling of the music CDs tends to advertise certain CDs based on the age of the user as well as the data aggregate for the certain age groups. Online analytic processing (OLAP) is depicted as a simple type of data aggregation methodology in which the seller uses an online reporting mechanism for dealing with the processing of the information.

Data aggregation can be user-based: personal data aggregation services offer the user a single point for collection of their personal information from other Web sites. The customer uses a single master personal identification number (PIN) to give them access to their various accounts (such as those for financial institutions, airlines, book and music clubs, and so on). Performing this type of data aggregation is sometimes referred to as "screen scraping."

Moreover aggregation methodology is also used in the field of JAVA that intends to represent a HAS-A relationship. This methodology is used in JAVA regarding the reusability of the codes. The impact of code reuse is certainly best achieved by aggregation when there is no is-a relationship. Moreover, inheritance should be used only if the relationship is-a is maintained throughout the lifetime of the objects involved; otherwise, aggregation is the best choice.

The prominent benefits regarding the usage of this stated methodology is stated as follows:

Supply – When presented in a consolidated way, in this case through sufficient volumes of produce of interest to the market. Thus the aggregation methodology is depicted to be used for maintaining the well balance of the supply in any field where there is a presence of huge amount of data.

Greater leverage – Strengthening negotiation positions and delivering benefits through better quality management and control. Thus it also tend to provide greater leverage to the organization that used the concept of aggregation.

Lower transaction cost – Reducing project and contract management cost in market led activities such as promotion, logistics, etc. Thus the decrease in the transaction cost is enhanced by the aggregation methodology for effective results.

Better management of the market – Allowing capacity issues in the market to be identified and managed together with simplified stock management and logistics providing buyers with more innovative supply solutions.

Better management of supply chain – Providing a single point of contact for all, improving communication with chain partners and stakeholders. As the data is stored in a collected format the management of the supply chain is enhanced by the usage of the data aggregation methodology.

View All Reviews
Concept Of Aggregation has been added in your library.