Define Alkyl Group. How Someone Can Identify One In An Organic Chemical Structure

Define alkyl group. Explain how someone can identify one in an organic chemical structure.

Define alkyl group. Explain how someone can identify one in an organic chemical structure.

The alkanes can be used in order to create a name of the alkyl group based molecules and can the also determine the structure in an effective way. In organic chemistry a distinct set of rules need to be followed by you while naming the compounds. The rulebook or nomenclature that is used for the purpose of naming the molecules is mainly called IUPAC or the International Union of Pure and Applied Chemistry. If you start with the alkane nomenclature you will be able to see the easiness of naming the alkyl molecules.

Alkane and alkyl are considered to be two major functional groups mainly based on removal of one hydrogen atom. With all the functional groups, the first process in naming involves the determination of prefix. This is thereby based on the number of carbon atoms that are present in longest chain of the compound. Also, the prefix is related to carbon count in the molecules. The smallest alkyl group is mainly methyl with the formula CH3−. Alkylation is a major operation in the refineries in the production of the high-octane gasoline. Alkylating antineoplastic agents mainly refers to a class of the compounds which are used in order to treat cancer.

For example, alkyl lithium reagents have the empirical formula Li(alkyl), where alkyl = methyl, ethyl, etc. A dialkylether is an ether with two alkyl groups, e.g., diethyl ether (O(C2H5)2). Alkyl also refers to the active ingredient in the green algae preventatives that are used in the swimming pools. Alkyl groups are usually attached to the other atoms or the groups of the atoms as well. The free alkyls occur as the neutral compounds as cations or as the anions. The cations are mainly called carbocations.

The anions are thereby called carbanions. Neutral alkyl free radicals do not have any special name. Such species are mainly encountered only as the transient intermediates and some are also quite stable and they can be "put into a bottle". The alkyl cations are typically generated using the super acids, alkyl anions are observed in presence of strong bases and the alkyl radicals are mainly generated by the photochemical reaction. Alkyl are observed commonly in mass spectrometry of the organic compounds. Alkyls form the homologous series and the simplest series have a general formula CnH2n+1. Alkyls include methyl, CH3·(named after methane), ethyl (C2H5·), propyl (C3H7·), butyl(C4H9·), pentyl (C5H11·), and so on. Alkyl groups that contain one ring have the formulae CnH2n−1, e.g. cyclopropyl and cyclohexyl. The convention of naming is mainly taken from IUPAC nomenclature,

The names are mainly used in order to name the branched chained structure  for example 3-methylpentane: 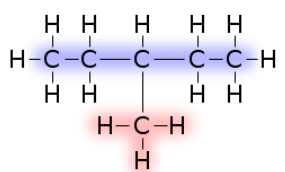 Structure of the 3-methylpentane consist of the two parts. The first part is, the five atoms that comprise longest straight chain of the carbon centres. The parent five-carbon compound in this case is named as pentane. According to the rules of nomenclature alkyl groups are included in name of a molecule before the root, like that in methyl-pentane. This is however considered to be ambiguous as methyl branch can be on the various carbon atoms. The name 3-methylpentane is given in order to avoid high levels of ambiguity. The 3- is mainly attached because methyl is attached to third of five carbon atoms.

If more than one of same alkyl group is attached to a particular chain, then prefixes are used on alkyl groups in order to indicate the multiples. This compound is known as 2,3,3-trimethylpentane. Here three identical alkyl groups attached to carbon atoms 2, 3, and 3. The numbers are included in the names in order to avoid ambiguity on position of groups and tri mainly indicates that three identical methyl groups are present. If one of the methyl groups attached to the third carbon atom were an ethyl group, then the name would become 3-ethyl-2,3-dimethylpentane. Each position on an alkyl chain can be described according to the number of other carbon atoms are attached to it. The terms primary, secondary, tertiary, and quaternary mainly refer to a carbon that is attached to one, two, three, or four other carbons respectively.

Alkyl groups α or γ to a pyridine nitrogen can depict added reactions because of the possibility of losing a proton from a carbon atom of the alkyl group which is adjacent to the ring. The ease based on proton loss mainly depends on number, orientation and the nature of heteroatoms within the ring that can carry the alkyl groups. The reactions of the type mainly consist of the two essential steps that are based on the loss of the proton and then the subsequent reaction with the electrophile. Alkyl groups bonded to the sp2-hybridized carbon atoms of alkenes influence the stability of the double bond. The chemical reactivity of alkenes also is often influenced by the number of alkyl groups bonded to the sp2-hybridized carbon atoms. The classification of alkenes is made possible with the help of number of alkyl groups that are attached to C=C structural unit.

View All Reviews
Define Alkyl Group. How Someon... has been added in your library.