Find the Radius; Height and Slant Height of Cone

Find the Radius; Height and Slant Height of Cone

A cone is a solid figure that is composed of an interior base and a circle along with the point that is given on the plain of circle which is known as vertex along with all the segments on the point of the circular base. A cone is a geometrical shape having three dimension that tapers from the flat base to the point that is called vertex and apex. Therefore, it is the surface that is traced by the moving straight line passing through the fixed point that is known as the vertex. The cone generatix is assumed to have the infinite length as it extends in both the direction from the vertex. There are basically two types of cones that is oblique cone and right circular cone. Right circular cone is the cone where the axis to the base from the cone vertex through the centre of the base of circle. The centre of the circular base is below the vertex of the cone. The cone is called as the right circular cone because the axis forms a ninety degree angle that is perpendicular to the circular base of the cone. In geometry, this is the most commonly used cone. Oblique cone on other hand is a cone having circular base, however, the axis of the cone is not perpendicular with the base. In the oblique cone, there is no vertex directly over the centre of base of circus. There are various properties of a cone that is listed below:

The area and volume of a cone can be found using the formula that is derived based on the radius, height and slant height of the cone.  That is the cone is formed using the line or the line segments connecting to the common point of the base that is circle. Cone can also be defined as the pyramid and it can also be stated as circular cone having cross section. Cone has got three dimension and they are as follows:

All the three dimensions are related and for defining the cone, it is required to have only two dimension. 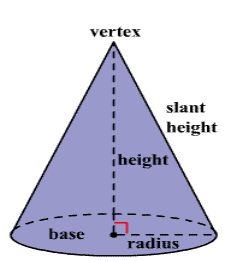 The above formula is the required formula for ascertaining the slant height.

It can be observed that given the slant height and radius of the circular cone, it is easy to obtain the length of height of cone using the formula mentioned above.

Using this formula, it is possible to ascertain the height, slant height and radius of the cone.

Given the height and radius of the cone, the slant height can be found.

Say, if the value of r is 5 cm and the height of cone is 8 cm. Then, the slant height can be obtained using the formula.

View All Reviews
Define Radius: Height and Slan... has been added in your library.