What is factorial number? How do calculate factorials? Example with solved example

What is factorial number? How do calculate factorials? Example with solved example

were described using combinatorial expressions and thus becomes very simple expression. The mathematicians Yang Hui, Tshu shi Kih, Shih–Chieh Chu and others found a recursion relation with the binomial relation and the fractional arguments in factorials are studied by I. Newton. The growth of n! is very fast as becomes larger and the growth rate was estimated by a asymptotic formula given by Scottish mathematician James Stirling. This is known as Stirling’s formula

The factorial plays an important role for determining the value of Gamma function. Euler approximated the gamma function in terms of factorial numbers (Γ(n) = (n-1)!). The factorial is also used in non-integer arguments with the notations and the parentheses for the binomials. Hindenburg used the factorials to generalize the multinomial expressions. The modern factorial symbol (n!) was first introduced by C. Kramp and the binomial symbol

was first introduced by A. von Ettinghausen. The operator factorial n!! was introduced far more years ago but its application in the complex arguments was first suggested few years back in 1994 by J. Keiper and O.I. Marichev when implementing Factorial2 in the programming language Mathematica.

The terms of different factorials are given by the following formulas.

An alternative form of Pochhammer symbol is

Multinomial expression is given by,

can’t be defined in a unique way. This is represented by limits as the two variables α and

Properties of factorials and binomials:

For any real value of the arguments values of factorials and binomials like n!, n!!, (a)_n,

If the arguments are zero then the values of factorials and binomials are simple and finite. In other words

In case the variable n is an integer or a rational number then n! and n!! can be presented by the general formulas given by, 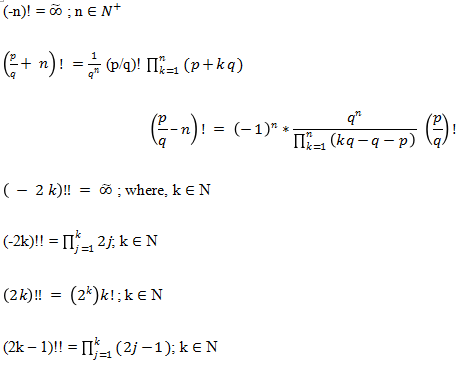 Some particular value of the Pochhammer symbol are given below. 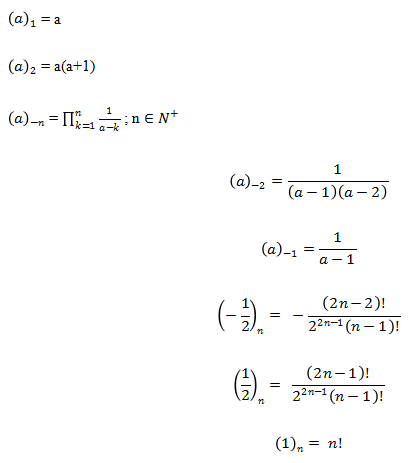 Some of the formulas of multinomial and binomials are 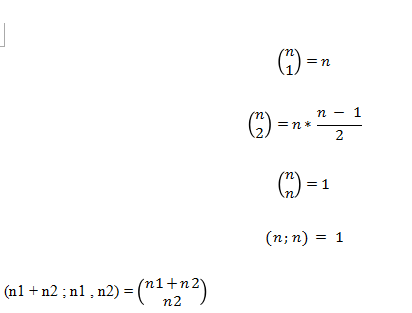 Factorials and binomials for complex variables:

The binomials and their factorials for their complex values are valid in n!, n!!, (a)_n

and . However, the factorials and binomials of complex variables do not have branch points and branch cuts. The n! and double factorial n!! do not have zero values and hence (1/n!) and (1/n!!) do not have singularities at zero but only singular point is z =

Poles and the essential singularities:

The factorial n! has infinite amount of singular points at n = -k; where k ∈ N+ have the poles with the residues

The double factorial n!! has infinite amount of singular points at n = -2k ; where k -1 ∈ N+ are the poles having the residues

For a specific a the function

has infinite number of points of singularity at n = -a –k; k ∈ N having the residues

When k is specific then the function

has an infinite number of singular points at n = -j; j ∈ N+ having the residues

When k in [1,m] where m is any finite positive integer not equal to zero, the function

and the residues of the function are

View All Reviews
Factorial Number has been added in your library.