Hooke’s law is used to define elasticity which is a property of the material that allows the materials to return to its original shape and size after it was being distorted. There are some materials that are not elastic and are brittle. These materials snap before they bend or stretch. Some other materials like rubber can stretch a long way without cracking. This is due to the fact that the molecules are wrapped up in a bundle and can straighten out when stretched.

In physics, elasticity is related to spring constant which is a number that represents the force it takes to stretch a material. The materials that have larger spring constants are much stiffer. Robert Hooke investigated the way in which the elastic materials and springs stretch. Hooke’s law states that the force that is needed to compress or extend a spring is directly proportional to the distance up to which it is stretched. In other words, the more the spring is stretched it becomes harder to keep it stretching. It is a linear relation.

Mathematically, Hooke’s law can be written as

The rate constant or the spring constant, k is related to the force extension in SI units N/m or kg/s2.

In the above equation, 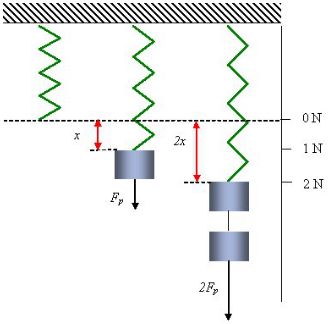 Fig: The extension of the spring is linearly proportional to the force

It is possible for multiple springs to act on the same point and in that case Hooke’s law can be applied. With all the other set of forces, the forces of many springs can be combined into one resultant force. As it has already been said that Hooke’s law show linear behaviour if it is depicted in a graph then the line that depicts the force as a function of displacement it should show a direct variation. There is also a negative sign on the right hand side of the equation as the force which is restoring always acts in an opposite direction of the displacement. When a bar is subjected to axial tensile/compressive force, its length is observed to change. The change in length is found to be proportional to the length of the bar. Therefore, it is fundamental to define the change of length in terms of the quantity ǫ = (L−L0)/L0 = ∆L/L known as the normal strain, where L0 is the original length, and L is the new length. Normal strain is thus a non-dimensional measure of the change in length. Strain is usually referred with units’ mm/mm or µm/m (micro-strain) etc. A strain gauge is used to measure the normal strain which lies on the principle of change of resistance of a wire with change in its length. In order to understand the mechanical behaviour of materials under load, we relate the normal strain produced in a bar to the normal stress applied (rather than the force applied). The normal stress is more fundamental than the applied force since, if we consider the atomic/molecular bonding forces resisting the deformation, stress reflects the force per bond. This relation is also known as the constitutive relation of a material. It is observed that, for small strains, commonly used structural materials exhibit a linear stress strain relation of the form σ = Eǫ, where E is known as the Young’s modulus, or modulus of elasticity. This relation is known as the Hooke’s law. Beyond the linear stress-strain relation regime, structural materials (such as steels) undergo plastic deformation at almost a constant stress. This phenomenon is known as yielding, and the corresponding stress value is known as the yield strength of the material. Once a material enters this regime, it suffers permanent set, which is the residual strain in the material that remains even after complete unloading. Hence, the material cannot regain its initial geometric dimensions. The value of stress at which the curve terminates is known as the ultimate strength of the material. A large number of engineering components are designed and used within the linear regime of the stress-strain relation by restricting the stress levels in the components up to the yield strength of the material. 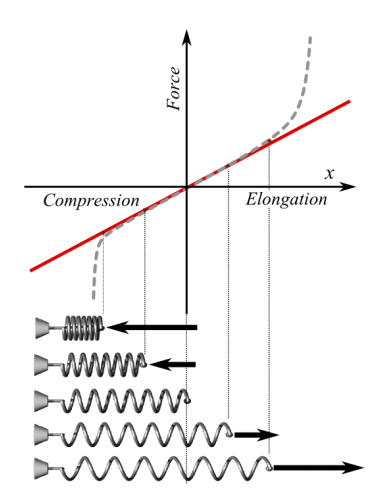 Fig: The red line in this graph illustrates how force, F, varies with position according to Hooke’s law. The slope of this line corresponds to the spring constant k. The dotted line shows what the actual (experimental) plot of force might look like. The pictures of spring states at the bottom of the graph correspond to some points of the plot; the middle one is in the relaxed state (no force applied). 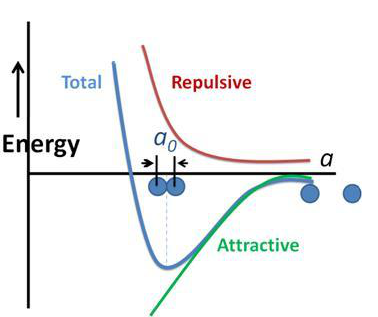 Where A, B, m and n are constants.

quantifies repulsive energy. Also note that m<n, then only atoms can attract each other.

Thus force F can be found out by differentiating equation (1) 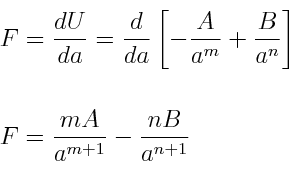 When a=a0, Force of attraction and repulsion is equal.

Find out the value of A

Put this value of A into the equation (2) 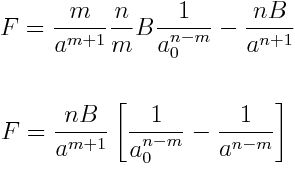 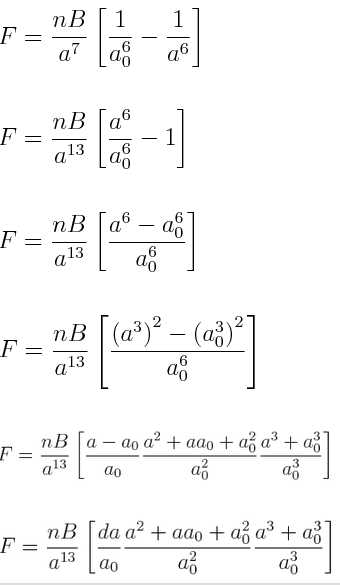 In elastic regime of material

By definition of strain ε 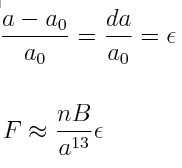 Dividing both sides by area and assuming area to be a constant in elastic regime of the material, 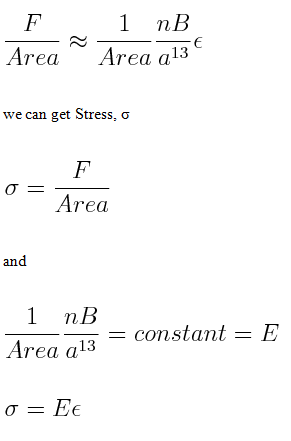 Thus, Hooke’s law should be observed over some range of distances is a mathematical consequence of some very basic physics, namely the nature of conservative forces.

View All Reviews
Generate The Mathematical Expr... has been added in your library.