What are Inequality Symbols in Math? Explain all with their solved example and their application

What are Inequality Symbols in Math? Explain all with their solved example and their application

In mathematics, an inequality is regarded as the relation which is held between the two values when they are different. Equations and inequality are considered as the mathematical sentences that are formed by relating two expressions with each other. In equality the two expressions are not treated as necessarily equal that are represented by the symbols such as >, <, ≤ or ≥.
Where;

It is noteworthy to denote that an equality comprises of a minimum of one variable which is known as open sentence. When an individual substitute the variable in the open sentence with the number leading to statement that are either true or false. If the statement is true, then the number is the solution to the equation or inequality.
If the values in the question are treated as the element of ordered set, namely the integers or the actual numbers, then they can be compared in size.

In either of the cases a cannot be considered equal to b. These kind of relations is treated as strict inequalities. The representation that a < b might also be interpreted as a is strictly less than b.

Explanation with solved examples and their applications:

The objective here is to have the X on its own on the left side of the inequality symbol
Something like: x < 5
Or; y ≥ 11 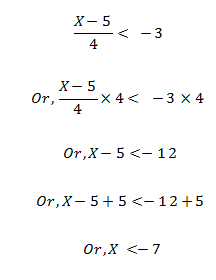 View All Reviews
Inequality symbol in Math has been added in your library.