Muscles Of The Hip And Thigh

Briefly explain the muscles of the hip and thigh with diagram

Briefly explain the muscles of the hip and thigh with diagram

There are four groups in the hip muscle; they are Gluteal group, Adductor group, Iliopsoas group and Lateral rotator group. These are discussed below with diagram. 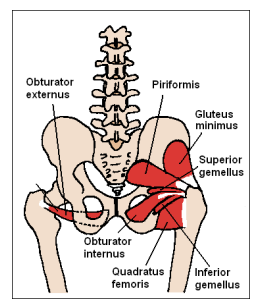 Gluteus maximum, gluteus medius, gluteus minimus and tensor fasciae latae are the main components of gluteus muscles; and the lateral surface of the ilium is covered by these muscles. 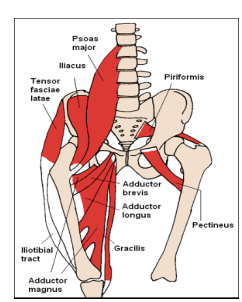 The main components of adductor group are adductor brevis, adductor longus, adductor magnus, pectineus and gracilis. Pubis is the originator of all adductors. These are inserted on femur’s posterior surface, medial and femur with gracilis as exception since it inserts below tibia’s medial condyle. 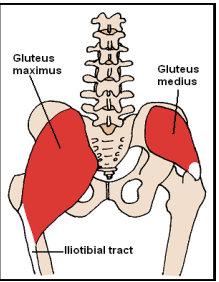 The muscles that make up iliopsoas group are iliacus and psoas major. Psoas major refers to a big muscle and it runs from the disc and bodies of the vertebra from L1 and L5 and then it joins iliacus through tendon and then connects to the lesser trochanter.
Lateral Rotator Group

The main components of this group are externus and internus obturators, the piriformis, the inferior and superior gemelli and the quadratus femoris. Origination of these muscles can be seen below acetabulum of the ilium. Then, it insects near the grater trochanter of the femur. 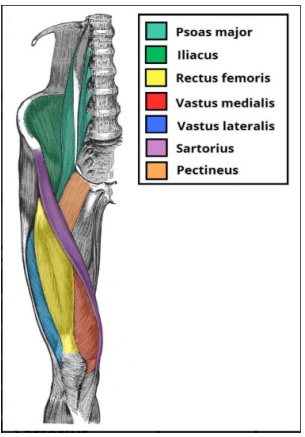 There are three parts of the muscles of thigh and these can be divided into three sections; they are anterior, medial and posterior. Separate function and innervation can be seen in each of these muscle section of thigh. The femoral nerve intervene the muscles of anterior section of the thigh and this helps in extending the leg at the knee joint. The anterior thigh consists of three portions; they are the Pectineus, Sartorius and Quadriceps femoris. In addition, the end of the muscle named iliopsoas passes through the anterior part of the thigh. Two muscles consist of the iliopsoas; they are psoas major and the iliacus. These two parts create from different parts, but come together to develop a tendon and thus, they are considered as one single muscle. The iliopsoas does not have any role in extending the leg at the knee joint. Three crucial pasts of thigh muscles are attachments, actions and innervation. The psoas major created from the lumber vertebra and the iliacus crates from the iliac fossa of the pelvis. Actions flexes the thigh at the point of hip. The anterior rami innervates the psoas major.

It is a effective and satisfactory work which is done within 2 hour after the order.

View All Reviews
Muscles Of The Hip And Thigh has been added in your library.