The first Pythagorean identity in Trigonometry:

The first identity probably looks like the Pythagorean theorem.

This identity of Pythagorean Theorem comes from the unit circle. All the right angled triangles formed by this unit circle will have their hypotenuse as 1. With the hypotenuse of 1 and an angle at the origin of the coordinate plane on which the circle is drawn, the relationship between the sides and the sine and cosines can be formed.  This identity is useful when a problem is seen with a sine squared plus a cosine squared. One can use this identity and replace the sine squared plus the cos squared with the 1.

The Second Pythagorean Identity in Trigonometry:

The Third Pythagorean Identity in Trigonometry:

The Pythagorean identities are very useful for simplifying the complicated trig statements and equations.

Example 1: Use Pythagorean Identities in order to find the missing trigonometric values.

find the value of the other trig functions

By the Pythagorean identity,

This is good, but we can go even further. If

then we can rearrange this identity by moving the 1 to the other side:

and then multiplying both sides by -1:

Being able to manipulate expressions will be helpful when solving more complex equations. 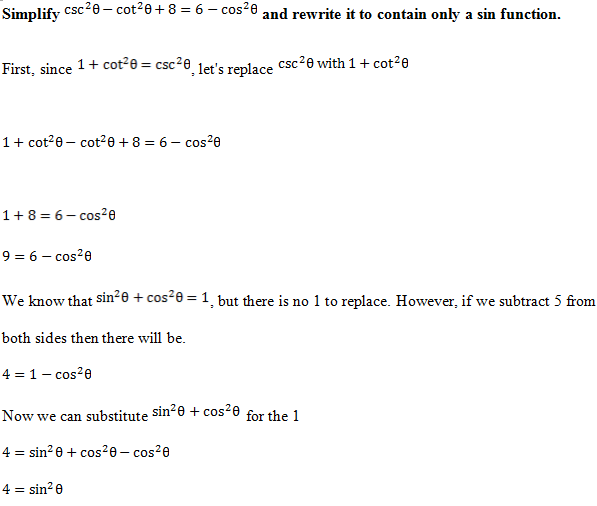 Deriving the Pythagorean identities lead to the understanding of the basic trigonometric proofs. Doing so will help them in solving an equation in both sides of the equation which can be manipulated to find a solution. However while proving for an identity; only one side of the identity can be manipulated. Pythagorean identities can be used for rewriting the trigonometric equations in equivalent form.

The Pythagorean Theorem allows an individual to convert between the sine and cosine values of an angle without being aware of the angle itself. Considering the example, the angle θ in quadrant IV for which the sin(θ) = -24/25. Here the Pythogorean identity can be used along with sin(θ) , in order to solve for cos(θ) .

While solving it the required answer would be cos(θ) = 7/25.

View All Reviews
Pythagorean Identities In Trig... has been added in your library.