Explain the Rectus Abdominis Muscle including its action, origin, and insertion with example and diagram? What is the main function of the rectus abdominis muscle?

Explain the Rectus Abdominis Muscle including its action, origin, and insertion with example and diagram? What is the main function of the rectus abdominis muscle?

The rectus abdominal muscle is also known as the abdominal muscle or the abs. It is considered as a paired muscle which runs vertically on each of the sides of the anterior wall in human abdomen. It is similar in some other mammals too.  There are also two other parallel muscles which are separated by a middle band of the connective tissues. This is called the Linea alba.  Right from the pubic symphysis, it extends to the pubic crest along with pubic tubercle inferiority.  The abdominalus sucurum is full of the rectus sheath consisting of the apneuroses of the  lateral abdominal muscles. There are bands of the connective tissue such as tendinous intersections which traverse the rectus abdominis. It fur6hre separates the parallel muscle into the distinct muscle bellies.  The most lateral line called the abs is the actually linea semilunaris.  In the abdomens of human body having low fat, the muscle bellies can be perceived externally and known commonly as “ four “, “ six”, “ eight” and “ ten packs”.  It depends on how many are visible but six packs are common.  It is a long flat muscle having the whole length of abdomen front.  It is also separated from the fellow in the opposite side of linea alba.  The Tendinous intersections would further subdivide each of the rectus rectus abdominis in a series of muscle bellies which are smaller and false too. The tensing of the rectus abdominis creates the expansion between the tendinous intersections.  It results in the characteristic of six or eight packs which are observed in the individuals having low body fat.

The size of abdominal muscle is around 10 mm in thickness and in the young athlets as the handball players.  The typical volume is almost 300 cm2 and the non-active individuals.  It is almost 500 cm3 in the athletes.  The supply of blood in the rectus abdominis has various sources of the arterial blood supply. There are classifications of the vascular anatomy of the muscles.  Firstly, there is inferior epigastric artery along with the veins which run superiorly on the surface of the rectus abdominis.  It serves the lower part of the muscle and secondly, the superior epigastric artery is the terminal branch in internal thoracic artery. There are supplies of blood in the upper portion. Lastly, there are numerous segmental contributions coming from the lower intercostals arteries as well.  The thoraco-abdominal nerves innervate the muscles and this is the continuation of T7-T11 intercostal nerves along with the anterior layer in the rectus sheath There is sensory supplies from the 7-12 thoracic nerves.  There are variations too. In the sternalis muscle which may be a variant form of pectoarlis of rectus abdominis. There are some fibres which are occasionally connected with costoxiphoid ligaments and along with that the side of the xiphoid process is involved.

The function of the rectus abdominis is an essential postural muscle.  It is highly responsible for the flexing of lumbar spine.  It is when a so-called crunch becomes responsible for the flexing of the lumbar spine, the crunch is the sit up.  The rib cage is brought to the pelvis during the fixation of the pelvis, in the fixation of the rib cage. The two of these can also be together simultaneously where nothing is fixed in its space.  The clinical significance of the abdominal muscle is that it is an injury that is in the wall of the abdominal muscle.  A muscle strain is happens when the muscle is stretched too far.  At the time of its occurring, the muscle is stretched too far.  In a common way, a strain causes the microscopic tears in the muscles.  It is in the occasional cases that there are severe injuries and the muscle can rupture the attachments.  Te rectus sheath hematoma is the accumulation of blood in the sheath within the rectus abdominis muscle.  It is the reason behind the abdominal pain without a mass.  The hematoma might be caused by the rupture of epigastric artery or the muscular tear.  There are causes such as coughing, anticoagulation, pregnancy, trauma and the abdominal surgery.  With the ageing population, the widespread use of the anticoagulant medications, it is evident that the historically benign condition is being more serious. 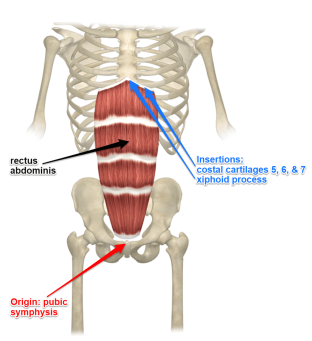 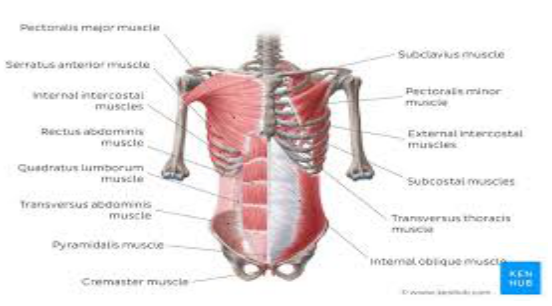 View All Reviews
Rectus Abdominis Muscle Includ... has been added in your library.