Derive The Formula For The Curved Surface Area Of a Cone

Drinking water is known to be most common activity. But people does not calculate the volume of glass of water that has been intake. Glass is the most suitable example for frustum of a cone. The volume of 3-D Shaped Structure has been already discussed in the earlier chapter. Glass is the most used shape till now. A glass tumbler is much similar to cone with its pointed part sliced. A glass is much similar like the frustum of a cone. It comes up with smaller end which is parallel to the base to be completely cut from the cone. The shaped received from the cone is defined as the frustum of the cone.

Frustum is a word of Latin origin which is all about “piece cut off”. In general, a solid is cut in such a way that the base of the solid and plane cutting the solid are completely parallel to each other. A frustum can be formed by the help of right circular cone which is achieved by cutting the tip of the cone. It is mainly done by cutting the perpendicular to the height from the lower base and upper base which is circular and parallel in nature. The issue can be generalized to some on other cones and n-sided pyramids. In frustum, the part of solid which lie in between one or two parallel lines which are cutting it. A right frustum is considered to be parallel truncation of a right pyramid of a right circular cone. In system graphics, visualizing frustum is a three dimensional region which is completely visible on the screen. This is mainly formed by the help of clipped pyramid more specially frustum culling.

In the aerospace domain, frustum is all about fairing in-between stages for a multi-stage rocket. If all the edges of the shape are forced to be identical then frustum tends to become a uniform prism. Each plane section is known to be floor or base of the given figure that is frustum. The axis is mainly of original cone or pyramid. Frustum is considered to be circular which has a circular base. It comes up with axis which is circular to the base and oblique in nature. Height of the frustum is considered to be the perpendicular distance which exists in between the planes of two base. Both cones and pyramids are viewed like degenerated cases for frusta. It comes up with cutting planes which passes through apex. So, as a result, the corresponding base reduces the given point. Pyramidal frusta come up with subclass for prismatoids. When two frusta are joined at their base then it results in bifrustum.

In combination with solids, the added volume for adjoining shape helps in giving shape to the total volume to the structure. For the given frustum, the cone needs to be sliced into smaller ends for the cone. So, there is a need of subtracting the volume of the sliced part. Frustum is the sliced part of the cone which is needed for calculating the volume. After that, difference of volume for two right crucial cones. 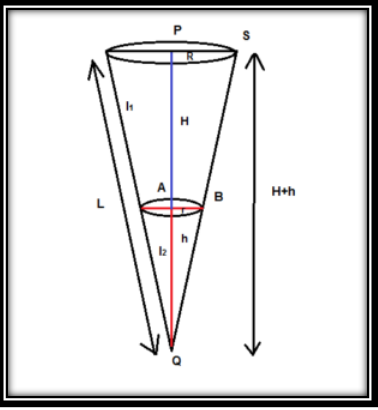 Volume of Tip of the Cone = 1/3 πr2h. For calculating the overall volume of the frustum we need to calculate the difference between the two right –circular cone. It provides us the formula

Now consider both the cones that are sliced cone we come to the point that, right angle of a cone Δ QPS is very much similar to a sliced cone is found to be Δ QAB. It provides us with formula R/r = H+h/ h.  H+h = Rh/r. There is need of substituting the value of H+h in the given formula for the volume of the frustum, we come to the formula,

Curved Surface Area and Total Surface area of the frustum

The curved Surface area of the frustum of the cone is π(R+r)l1  .

The given equation has been collected by making use of similarity of triangle property that exists in between the triangle QPS and QAB. Proper understanding of the various subject can be done by the help of measurement of volume, curved surface area and surface area.

View All Reviews
Derive The Formula For The Cur... has been added in your library.