The integration of a function is done by the use of a numerical method known as Simpson’s rule. This method is particularly useful when the integration is difficult or cannot be done by using standard techniques. Simpson rule is an important formula that is widely used in calculus for calculating the complex functions, which cannot be solved by the conventional procedures. Simpson’s rule is of great importance to math and Physics to perform complex integrations and the differentiation.

Integration and anti-differentiation is an excellent idea of math. Normally there are different rules and methods for integrating that work for most of the f(x) functions that we counter. There are some functions, which are quite difficult to integrate by using normal techniques. One application of the Simpson’s rule is the calculation of the moment of inertia of a Gaussian shaped body. For calculating this part, there is no closed from solution for the integral of a Gaussian curve amidst the two values (other than -∞ to +∞). In order to find this, Simpson rule is used. The rule has been named after name of the English Mathematician, known as Thomas Simpson. This was a way to approximate the integrals without having to deal with the narrow rectangles.

Simpson’s rules is based on the fact, that if any three points are given, then the quadratic equation can be found out through these points.

One can do the same thing with the remaining points:-

Now this system of equation can be solved for a,b and c and get the quadratic equation.

The system of equations can be solved in the following ways. 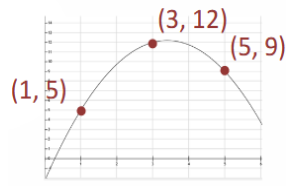 This fact influenced Simpson to approximate the integrals using the quadratic equation . In order to integrate f(x) over the interval from a to b,

Because, it is easier to integrate, one might just integrate the quadratic over the intervals. Another shortcut for this procedure involves-

Simpson’s rule can be used to find out the area between a parabolas between two points. A parabola can be referred to as a curve, that resembles the letter U or an inverted U.

It can be started by constructing a parabola to the curve between x=3 and x=1.

Simpson’s rue is almost like trapezoid rule, except instead of fitting a line, a parabola is fit in the three points, a,b, and (a+b)/2

The formula for this is:

Where h= b-a (this is often the known as the Simpson’s 1/3 rule, as there is another Simpson rule, which is based on the quadratic interpolation. First, it is necessary to examine how the rule acts on the integral of sin x with one piece: 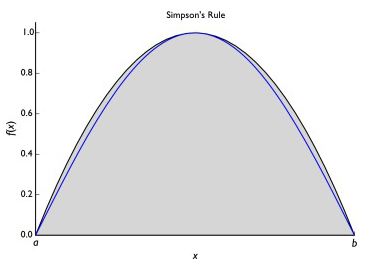 It acts like a function and it can be well approximated by a parabola.

Sometimes it so happens that,  the  functions that we are trying to integrate is not smooth over the interval. It means that the function is either oscillatory, or it lacks derivatives in some of the points. In such cases, the Simpson rules might generate poor results. One of the common way of handling this problem is by breaking up the interval (a,b) in to n>2 subintervals. The rule is them applied to each of the sub intervals, with n as an even number. Hence, the composite Simpson’s rule is given by:

This composite is ruled with n=2 that corresponds to the regular Simpson’s rule of the preceding action.

The error found in the composite Simpson’s rule is

The error is bounded by:

great work as per expectation. Referencing done right. no plagiarism. no similarity found

My grade is high in this course after making some corrections, i email my assignment.com for additional materials and the assignment was done to my satisfaction. Bravo to the job well done from the professional tutors I\'m very happy. unlike other ...

Thank you for your fabulous work performance. Your solution gave the base to create my own work, which I did and I think it is perfectly splendid. I am looking forward working with you in the future. Once again, thank you kindly.

im satisfied with the work and i will continue do my assignment here. The price is also reasonable and the work completed 10 days earlier

View All Reviews
State And Describe Simpson Rul... has been added in your library.