Structure and Function Of The Brain

Explain the structure & function of of the brain.What is brain and its function?

Explain the structure & function of of the brain.What is brain and its function?

The structure of brain mainly composed of three major parts which are forebrain, midbrain and hindbrain and each of them with multiple parts. In case of forebrain, it is known as cerebral cortex and it is the largest part of the human brain and it is mainly connected with thoughts and actions. It is mostly composed of left and right hemispheres and it performs the different functions such as touch, vision along with hearing.

In case of midbrain, it is located below cerebral cortex along with above hindbrain which places it near the centre of the brain. It is considered to be the region of developing vertebrate brain which is composed of tegmentum and tectum. It helps in serving the important functions such as movements related to eye along with visual and auditory processing.

Lastly, in case of hindbrain, the cerebellum is same to the cerebrum with two hemispheres along with highly folded surface. It is associated with proper regulation as well as coordination of movement, balance and vasomotor centres. The hindbrain consists of pons as well as cerebellum and medulla lie besides spinal cord and it helps in controlling the different functions outside the conscious control such as flow of blood and breathing. 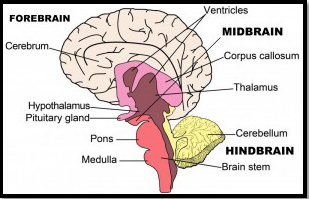 Brain is considered to be the largest as well as most complex organs in the entire human body. It is prepared of more than 100 billion nerves which helps in communicating in trillions of connections called synapses. The brain stem is present between spinal cord as well as the rest of the brain. It is considered to be the organ which serves as the centre of the nervous system which is present inside the skull and it consists of greyish nerve cells along with whitish fibres of the nerves. Moreover, it is considered as the organ of thought and the central control point of the overall nervous system as well.

Moreover, there are six major functions of the human brain which consists of cognition, perception, emotion, behaviour, somatic along with signaling.

In case of thinking or cognition, it is inclusive of internal mental systems as well as processes which plays a major role in communicating, focusing, attending and contemplation of the ideas.

The perception is defined as the ability to use the five senses such as to see, hear, smell, touch and touch.

Emotion is defined as the ability to experience the different kinds of feelings as well as expressing those feelings to the other individuals such as analysis of being happy, peaceful, discouraged, pleased as well as joyful.

The behavioural functions include listening, reading, working as well as playing which needs to be analyzed through the help of the brain and it helps in analysing the functions appropriately.

The different kinds of physical activities of brain includes the different activities which are required to be performed by the individuals in an appropriate manner.

Signaling is the last function of brain wherein it helps in being responsive as well as react to the environment appropriately.

View All Reviews
Structure and Function Of The ... has been added in your library.