In the side-based special right triangles, the sides of the triangles depicts length of integers and the composition of the length represents Pythagorean triplets and it reflects angles that cannot be rational number in respect to the degrees. The sides in the side-based special right triangle represents the formula deduced by Euclid regarding the Pythagorean triples can be represented as: m2-n2: 2mn: m2 + n2. In isosceles right triangle reflects the features of a right triangle and isosceles triangles. The right triangles have equal angles (two), equal sides (two) and a right angle, where the value of the right angle cannot be equal to the other two equal angles as it can exceed the sum of angles from 180 degrees. Special triangles reflects simplistic ratio between the sides of the each sides 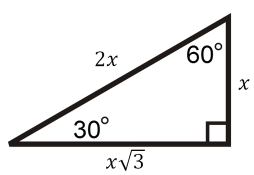 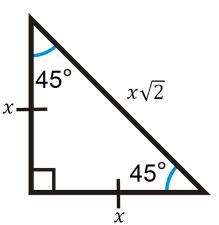 The ratio of the sides of 45°–45°–90° special right triangle can be represented as x, x, x√2. The Pythagorean theorem can be confirmed through,

The examples of special right triangle are:

In case of a special right triangle, 30°–60°–90° reflects hypotenuse of the length 10. The question is to find the size of rest two sides. Hypotenuse is the term used for the side opposite to 90-degree angle.

From the Table, the following equation can be formed:

Therefore, the two other sides deduced from the equation are, 5 √3

Identifying the missing length of the special right triangle in the form of a ratio. 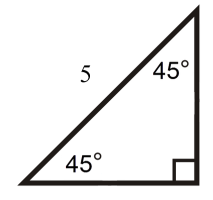 View All Reviews
What Are Special Right Triangl... has been added in your library.