What Is Anatomical Position And Why Is It Important?

In many of the instances, these terms can be paired. For example, the posterosuperior view does the combination between the posterior and superior which puts forward a view of looking down at the back of one’s body.

Anatomical positions of the human body

The purpose behind the anatomical position is to be able to clearly discuss about the different moving parts of the body ignoring the fact as to how they are moving or in what position they are. This makes the method easier to avoid the confusion when the discussion regarding the human anatomy is carried out. In case of humans, the standard anatomical position is with the body standing up straight or facing forward with the arms kept by the side of the body and the palms of the body facing forward. The legs are straight and the feet are slightly at a distance from each other. This is used as a starting point for the description of the body.

The various anatomical positions of the body are,

Description of the anatomical position

There are mainly three planes present in the human body which transect and divide the bodies into left and right sides. They are referred to as the sagittal plane, the coronal plane and the transverse plane. The sagittal plane runs down the center of the body and dissects the body into the left and the right sides. The coronal plane divides the body into the dorsal and the ventral sides. The transverse plane is at the waist and runs parallel in accordance with the ground dividing the body into two sections, namely the cranial and the caudal sections.

The following diagram shows the different planes of the body related to the human anatomical positions, 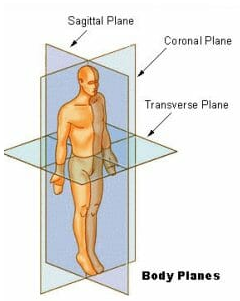 There can be the existence of a number of sagittal planes, however there is only one single cardinal sagittal place. The term cardinal refers to that one particular plane that divides the body into two equal segments, with exactly one half of the body on either of the side of the plane which are mentioned, referred to as the cardinal plane. The term cardinal plane is also referred to as the principle plane.

View All Reviews
What Is Anatomical Position... has been added in your library.