What Is Meant By Deadweight Loss In Economics? Significance and State Its Formula

What is meant by deadweight loss in Economics? Discuss its significance. Also, state its formula and examples.

What is meant by deadweight loss in Economics? Discuss its significance. Also, state its formula and examples.

Deadweight loss is considered to be the loss that is borne by the society and it results when the resources are allocated in an economically inefficient manner in the market. That is, it is the loss of economic efficiency in terms of consumer and producers utility such that there is difficulty in achieving allocative and optimal efficiency.  It represents the social loss and the loss of total welfare due to the reasons such as floor or price ceilings, subsidies or taxes, monopoly pricing and externalities. The loss of benefits results in creation of excess burden to the trade participants like producers, consumers and government.

The concept of dead weight loss is considered to play an important role for the policy makers as it helps them in evaluating several options of government interventions and regulations. The introduction of new taxes or price floor by the government also results in generating the welfare loss along with it. In such scenario, it is of utmost importance for the government to make them aware of the consequences of their actions. It enable them to weigh their action benefit against the social cost caused by them and accordingly take the actions that is in the best interest of the society and for their welfare.

The imperfect competition such as monopolies and oligopolistic also results in creation of deadweight loss. The supply of the product is restricted in an imperfect market for increasing the price above their average total cost. Consumers are restricted from enjoying the products due to higher prices and therefore, there is the creation of deadweight loss.

Under taxation, the government charges for the products above the selling price of the goods and services such as sales tax. In addition to this, price floors are the price control that is sanctioned by the government under which the seller is prohibited from charging below a certain level of price set for services and goods.

For example, the price set on beer and wine results in the creation of deadweight loss due to taxation. If the price of a glass of beer and wine is equal, say if the price is $ 12, the wine might be preferred to be drunk by some consumers. If the government is intending to place a tax on per glass of wine at $2 per glass, then the consumers might choose to drink beer instead of wine. At the same time, there would be binding constraints on the items benefitting when the adverse impact of deadweight loss is outweighed by the benefit resulting from the transfer of surplus. 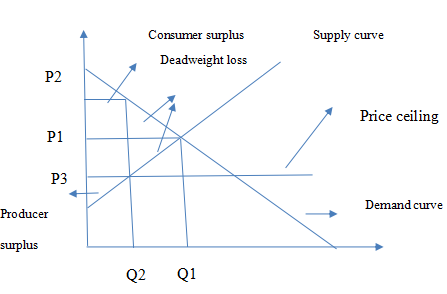 The supply and demand of goods and services are impacted by the external limits that is placed on the prices of the goods and services. Computation of deadweight loss can be explained with the help of an example. Suppose, an individual plans to see a concert for which the price of ticket is $ 35. However, a value of $ 45 is assigned by the individually personally to the experience of seeing the concert as the most popular musician is performing. The individual is interested in going to the concern is that the value received by seeing the concert us greater that the cost incurred for the concert. This can be written down more precisely by finding out the net value that is coming to $ 10.

Now, let us consider a scenario where the government is intending to tax the concert at 65%. After the imposition of the tax, the new tax of concert would be (.35*45+ 45) = (15.75+45) = $ 60.75. Since, the concert is valued by the individual at $ 45, he or she will choose not to value the concert. The deadweight loss results in the valuation of the tickets that it is not getting sold and this is due to the extra amount of cost that is added to the cost of tickets resulting from the imposition of tax.

The formula for computing the deadweight loss is given by

The formula can be interpreted as

P1 and Q1 being the equilibrium price and quantity of items or the tickets sold before the imposition of tax.

The imposition of the tax by government results in shifting of the supply curve in the upward direction that is there is a reduction in the supply of tickets and the tax compels the seller to supply less.

There is an increase in the price for the buyers of tickets and the price increase to P2 while the price received by the seller decreases and fall below the equilibrium level. Imposition of tax results in decrement of the supply of tickets from Q1 to Q2. Therefore, it can be seen that the imposition of tax has resulted in the creation of deadweight loss as the buyers are not able to buy the tickets and seller are not able to sell the desired amount of tickets.

View All Reviews
What Is Meant By Deadweight Lo... has been added in your library.