Referencing Styles : Harvard | Pages : 28
Question One  Jack’s business premises were destroyed in a fire and all his records were lost apart from a recent analysis that he had made of the latest period’s results for his company Box Limited. He managed to retrieve the following:     Required:  From the information given reconstruct a Statement of Profit or Loss and a Statement of Financial Position.    Question Two  During the COVID-19 crisis Josh lost his job and decided to st ...

Jack’s business premises were destroyed in a fire and all his records were lost apart from a recent analysis that he had made of the latest period’s results for his company Box Limited. He managed to retrieve the following: 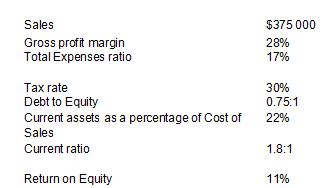 During the COVID-19 crisis Josh lost his job and decided to start a pop-up business selling portable camping stoves when the social distancing restrictions were lifted as a way to generate cash until had could get his old job back. The stoves cost Josh $48 and he sells them for $68.

If his customers pay cash, which accounts for about 35% of sales, he gives them a 10% discount.

Internet and credit card payments attract a 5% discount. These also make up about 35% of sales. 12% of credit customers normally pay in the month following the month of sale, with a further 8 % two months following , 6% in the three months following and the remaining 4% are uncollectable.

He estimates that sales will grow as restrictions are lifted on the following basis:

Josh has negotiated with his supplier that he can pay for any purchases over a two-month period with 50% of the price paid in the month of purchase and the remainder the following month. As an incentive the supplier has offered a 5% discount for payments made promptly in the month of purchase.  As Josh is just starting up his business in May he has cash flow issues and won’t be able to make any payments until June when the full invoice will be settled.

He bought 50 stoves in April as his opening inventory, which will need to be paid for in May, and he would like to have enough inventory at the end of each month to supply 60% of the following month’s sales.

Will Josh need extra cash funds for any purchases if there are insufficient generated by sales?

Framed Limited manufactures standard window frames in its factory in Berrimah with a capacity to produce 180 000 annually. The following costings are available:

b.If Framed Limited wished to achieve an annual profit of $910 000 how many windows would have to be sold?

c.There was a review of their marketing and distribution costs, and it was recommended that an incentive bonus scheme should be introduced in an effort to increase sales and reduce costs. The variable marketing and administrative costs would increase by $15 a window but the fixed marketing costs would decrease by $360 500.

i.What would the new breakeven point be if these recommendations were implemented?

ii.Do you think that Framed limited should institute the recommendations? Provide an explanation of the possible benefits and risks.

d.A new manager has been reading about CVP analysis and believes that it is such a useful tool because it provides management with such accurate picture of what is possible. Discuss this statement.

The Alice Springs furniture factory estimates that for 2017 the production activity will be as follows:

The manufacturing overhead is allocated to production on the basis of direct labour hours. At the end of the year the following data became available:

a.Calculate the predetermined manufacturing overhead rate at the beginning of the year.

b.Calculate the actual manufacturing overhead rate for the year.

c.Calculate an inventoriable product cost based on:

iii. Provide a suggested explanation why the original budgeted amounts should differ from the actual results.

I got my homework done before the day I need and they gave me a discount for my first order. So fast and everything correct. I got an A on my homework!!!

better service this time. Meets my expectations.Thankyou so much to the expert and whole team involved.

I am very happy with my assignments outcome. I got an A and it was outstanding work!! Thanks for all the help.

thanks for you work.it was good assessment i got good score in this assessment around 83.

View All Reviews
ACT507-Accounting for Managers has been added in your library.