Referencing Styles : APA | Pages : 29
Question 1 Visit the Australian Stock Exchange website, www.asx.com.au and from “Prices and research” drop-down menu, select “Company information”. Type in the ASX code “NAB” (National Australia Bank), and find out details about the company. Also, type in the ASX code “ANZ” (Australa & New Zealand Banking Group), and find out the details about that company. Information available in the ASX website will be inadequate for your purpose, you will ...

Visit the Australian Stock Exchange website, www.asx.com.au and from “Prices and research” drop-down menu, select “Company information”. Type in the ASX code “NAB” (National Australia Bank), and find out details about the company. Also, type in the ASX code “ANZ” (Australa & New Zealand Banking Group), and find out the details about that company. Information available in the ASX website will be inadequate for your purpose, you will need to search the internet for more information. Your task will be to get the opening prices of NAB and ANZ shares for every quarter from January 2011 to December 2019 (unadjusted prices). If you are retrieving the monthly prices, read the values in the beginning of every Quarter (January, April, July, October) for every year from 2011 to 2019 (Total 36 observations). After you have researched share prices, answer the following questions:

(a)List all the quarterly opening price values in two tables, one for NAB and the other for ANZ. Then construct a stem-and-leaf display with one stem value in the middle, and NAB leaves on the right side and ANZ leaves on the left side. (Must use EXCEL or similar for the plot.

(b)Construct a relative frequency histogram for NAB and a frequency polygon for ANZ on the same graph with equal class widths. Use two different colours for NAB and ANZ. Graph must be done in EXCEL or similar software.

(c)Draw a bar chart of market capitals (or total assets) in 2019 (in million Australian dollars) of 6 companies listed in ASX that trade in similar products or do similar business as NAB or ANZ with at least AUD 500 million in market capital.  Graphs must be done in EXCEL or with similar software.

(d)If one wishes to invest in NAB or ANZ, what is the market recommendation (for example, from Morningstar, Fatprophets, InvestSmart, etc.)? If you cannot find the information, what would be your recommendation based on your research of these two companies (trend, P/E ratio, dividend yield, debt and Beta)?

From the information provided in the table above,

(a) Calculate the mean and standard deviation for each state.

(b)Calculate the Minimum, Q1, Median, Q3 and Maximum values for each state.

(c)Draw a box and whisker plot for the number of new vehicles sales of each state and put them side by side on one graph with the same scale for comparison. (This graph must be done in EXCEL or similar software and cannot be hand-drawn.)

The Table below is taken from the Australian Bureau of Statistics (ABS) website. It provides data on Australian households with internet access at home from the Household Use of Information Technology Survey. 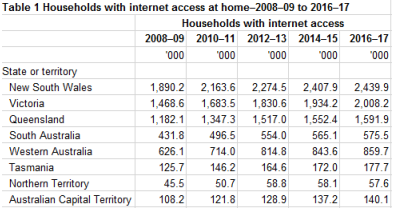 From the information provided in the table above,

(a)What is the probability that a randomly selected household lives in South Australia?

(c)Given that a household has an internet access in 2010-11, what is the probability that a randomly selected household lives in New South Wales?

What is the probability that a randomly selected household lives in Victoria and has an internet access in the year 2016-2017?

(b)A marketing company is conducting an experiment in which participants are to taste one of two different brands of coffee. Their task is to correctly identify the brand tasted. A random sample of 150 participants is taken and it is assumed that the participants have no ability to distinguish between the two brands.

(i) What is the probability that the sample percentage of correct identifications is greater than 70?

(ii) What is the probability that the sample will have between 40% and 50% of the identifications correct?

(c)A survey conducted by Burwood train station found that the average time of train arrival at the station is normally distributed, with a mean of 36 minutes and a standard deviation of 3 minutes. What value does the upper 5% of the time exceed

(c)An airline company found that 395 out of 800 travellers cancelled their airline bookings after they had selected their flight details. At 0.01 level of significance, is there evidence that the population proportion of travellers who select their flights and cancel their bookings is less than 0.45?

Got 80 percent, nice job. thank you for the support and help. The chatbox was very supportive

I haven’t submitted as I’m going to re write in my own words. However, I was fed to say a big thank you. I used another company for a different assignment and let me down. I’d definitely recommend if I get a good grade.

This is the first time I have used this service and I felt very disappointed. The paper contained many grammatical errors. It was evident that the writer did not have any clue of capitalisation. They started many sentences with lower case letters and...

Task 3 activity 2 & 3 still remaining. U guys are not professional at all. Fix this asap.

View All Reviews
STAT20029-Statistics for Mana... has been added in your library.