Referencing Styles : Chicago | Pages : 35
Assignment Jimmy operated his own shoe design and manufacturing business from a warehouse in the CBD.  Jimmy purchased the warehouse on 1 July 2018 for $1.5 million, it had been constructed in 2010 and the cost associated with construction was $500,000. He also offered weekend classes in shoe design to up and coming designers.  Students signed up for a 20 week course which was paid in advance.  Jimmy offered refunds to students who cancelled their courses.   Income rece ...

Jimmy operated his own shoe design and manufacturing business from a warehouse in the CBD.  Jimmy purchased the warehouse on 1 July 2018 for $1.5 million, it had been constructed in 2010 and the cost associated with construction was $500,000. He also offered weekend classes in shoe design to up and coming designers.  Students signed up for a 20 week course which was paid in advance.  Jimmy offered refunds to students who cancelled their courses.   Income received was kept in a suspended income account.  At the end of each month the value of classes run that month were removed from the suspended income account and accounted as income.  While many students bring their own materials, Jimmy maintains a stock of cotton, fabric and accessories which he buys from a number of suppliers.  They give his 30 days credit which he always uses.  The stock is used very quickly so Jimmy treats them as consumables rather than trading stock.

Jimmy’s income and expenses for the current year are as follows:

Compensation payment for loss of business profits when he broke his ankle trying out a new style of shoe and couldn’t work. 40,000

(franking credits attached to the dividend were $1289)

Jimmy is a member of the army reserves and received wages for his duties undertaken for the year 10,000

Purchases of stock for use in manufacturing shoes 965,000

Purchase of uniforms for himself and his staff

That was branded with the shops logo 5,800

Motor vehicle expenses for Jimmy his records showed 80% business use 25,000

Jimmy often took some work home with him and incurred the following expenses, he estimated that he spent around 30% of him time working from home

Payment to his sister for taking his place at the sewing classes whilst he was on holiday.  If he had paid a casual from an employment agency it would have cost $2000 but he wanted to help out his sister and paid her a bit more. 3500

Superannuation for employees 9.5% of gross wages

Payment to his accountant for completing his income tax returns 4,300

Advice from his legal advisor on the benefits of changing his structure from its current mode of a sole trader to a company 1,500

c) Base Value $145,000.  Jimmy wished to minimise his profits on the business 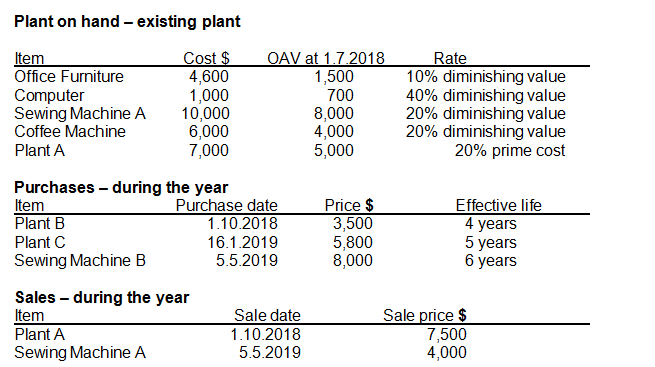 1.Jimmy sold off some of his assets during the financial year so he could buy the warehouse for his business.

Brokerage on purchase and sale was 1% payable at the time of the transaction.

Calculate Jimmy’s taxable income and his net tax payable including Medicare Levy for the year ended 30 June 2019.  Please provide reasons for any exclusion of items from your answer.

View All Reviews
TAXA2000-Introducation to Aust... has been added in your library.