Referencing Styles : APA | Pages : 21
Question: ‘Super Eta’ Analysis and Report (Version 2020) Task: You have been approached by an engine developer/builder to provide your professional opinion on an issue they are facing. You are to provide a detailed engineering report outlining your analysis and recommendations. Your report should be of a standard that could be provided to a paying client. Background: A common performance upgrade for the BMW E30 from the mid-eighties is to build a ‘stroker’ ve ...

You have been approached by an engine developer/builder to provide your professional opinion on an issue they are facing. You are to provide a detailed engineering report outlining your analysis and recommendations.

Your report should be of a standard that could be provided to a paying client.

A common performance upgrade for the BMW E30 from the mid-eighties is to build a ‘stroker’ version of the M20 ‘baby-six’ engine using many original components. Several versions of the M20 engine were produced by BMW with capacities from 2.0l to 2.7l. The largest of these (known as the ‘eta’ engine) was built during the oil crisis of the early eighties, and consequently is focused on fuel efficiency.

To produce an efficient engine, BMW increased the stroke of their existing 2.5l engine (from 75mm to 81mm) and designed the head and camshaft to produce a large amount of torque at low RPM. The high torque engine was very efficient for general driving, however the design was very limited in terms of outright power (the original ‘eta’ engine was electronically limited to only 4800RPM).

An M20 ‘stroker’ or ‘super eta’ is built using an ‘eta’ crankshaft and a ‘2.5i’ head and valve-train. If done properly, this provides a high revving, larger capacity engine (2.7lt as opposed to 2.5lt) that produces significantly more power.

When building a ‘super eta’, three options are available in terms of connecting rods;

The original ‘eta’ connecting rods can be used. These have a length of 130mm.

Connecting rods from a 2.5i engine can be used. These have an equivalent strength as the ‘eta’ connecting rods and a length of 135mm.

Connecting rods from a more modern M3 (US version) can be used. These have the same geometry as those from the 2.5i engine (i.e. 135mm), however they are around 10% stronger and slightly lighter.

In each case, after-market pistons are readily available to maintain the same ‘deck height’ and compression ratio.

The 5mm difference does not sound like much, however there is debate over how much impact it has. Most of this debate is on internet forums and tends to be fairly unreliable. Conventional wisdom suggests that the longer connecting rods are preferred as they provide less side loadings on the bores and produce motion that is closer to sinusoidal which improves the ballance .

The engine builder has posed the following questions to you;

You are to analyse the kinematics and kinetics of the engine components and provide advice back to the engine builder on your findings.

In particular, your report should address the following questions;

You may neglect any forces produced by combustion. Make sure you outline your assumptions and the limitations of your analysis in the report. 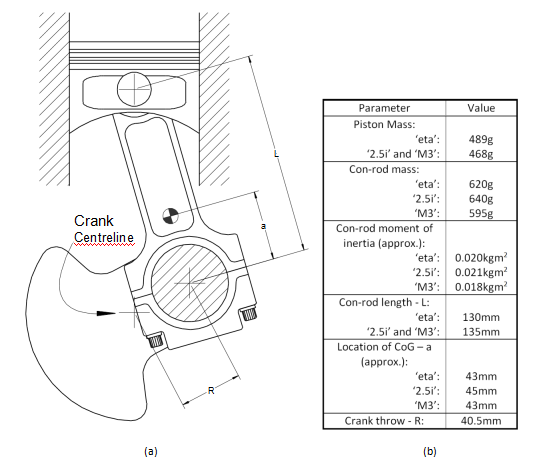 View All Reviews
MECH2360 Dynamics of Machines has been added in your library.