MECH4410-Mechanics of Solids 2 and FEA

Referencing Styles : APA | Pages : 12
Assignment Figure 1 shows the cross-section of a bar designed to carry either a distributed load along its length or concentrated loads at various points along its length. Assume the bar is fully constrained at its restraint points 1200 mm apart. The bar is manufactured from aluminium alloy (select an alloy and use it for both the beam and plate models). Undertake the following: 1. Create a beam finite element model of this bar. This will require you to create a cross-section of the bar usi ...

Figure 1 shows the cross-section of a bar designed to carry either a distributed load along its length or concentrated loads at various points along its length. Assume the bar is fully constrained at its restraint points 1200 mm apart. The bar is manufactured from aluminium alloy (select an alloy and use it for both the beam and plate models). 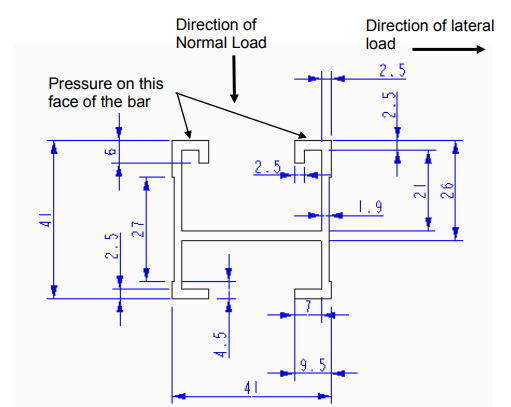 1. Create a beam finite element model of this bar. This will require you to create a cross-section of the bar using plate elements, and

Apply the following loads to both models:

1. A uniformly distributed normal load of 400 N between the two restraint points, see figure 1 for the direction of this load. For the plate model, this load is applied as a uniform pressure on the top surface of the bar, see figure 1,

2. A uniformly distributed lateral load of 300N along the full length of the bar in the direction shown in figure 1. For the plate model, apply this load as a shear stress on the surfaces indicated in figure 1

3. A normal point load of 400N midway along the bar (use a small area to apply this load as a pressure in the plate model), and

4. In Strand7, the lateral load for the beam model is applied on the neutral axis of the beam. Clearly this load is not in the correct position as the desired load is applied at the top of the bar. Use non-structural mass to apply this load in the correct location. I will create a zoom presentation to show you a technique of applying this load to the beam.

Apply all loads using separate load cases for the beam and plate models of the bar.

Compare the following: 1. The mass of both the beam and plate model as calculated by Strand7;

2. The centre of mass for both the beam and plate model as calculated by Strand7;

View All Reviews
MECH4410-Mechanics of Solids 2... has been added in your library.