Introduction to the Laboratory

Baseband transmission of data is one of the simplest ways we can implement a digital communication system and involves encoding information as electrical waveforms called ‘line-codes’ to represent ‘zeros’ and ‘ones’ (or groups of ‘zeros’ and ‘ones’), an example of some line-codes are shown in Figure 1. 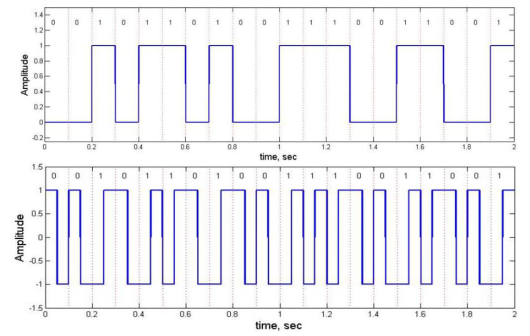 While baseband digital communication is commonly used, it does have the limitation of only being practical on wired transmission media, for wireless applications we need to approach this in a similar way to analogue communications.

Digital modulation is used largely for wireless applications and are based on much the same principles as analogue modulation (a digital message modulates a high frequency carrier to create a signal suitable for wireless transmission).

Two of the most commonly used digital modulation schemes in modern applications are Quadrature Amplitude Modulation (QAM) and Phase Shift Keying (PSK), these two techniques are used in many international standards for digital data transmission.

This lab will look at both baseband and modulated digital communication systems, for the first part of the lab we’ll be examining different line-codes and their bandwidth efficiency. In the later parts we’ll be considering two types of digital modulation (PSK and QAM).

In this experiment we’ll be simulating digital communication systems using MATLAB and will be displaying the resultant signals in both the time and frequency domain.

For this lab task you can use the MATLAB functions on Canvas that will generate the different line-codes for this task (NRZGen.p, RZGen.p, ManchGen.p and BiPGen.p)

Line-coding is an essential part of digital communication systems, it’s the process of taking the ones and zeros (bits) from a binary stream of data and converting those bits into an analogue, electrical signal that can be transmitted through a channel (or, in the case of digital modulation, can then be used to modulate a carrier).

There are many different line-codes that are used in different applications and each have their own draw-backs as well as benefits for different systems. Some line-codes are designed in such a way as to be bandwidth efficient, some to have in-built synchronisation abilities, or to have a reduction of DC component.

This part of the lab will be examining several of these line-codes and considering each code’s attributes in both the time and frequency domains.

In MATLAB, start by generating a random sequence of 200 binary encoded data bits (1s and 0s). The rand() function can help you do this; set all values generated from rand() that are ³0.5 to 1 and anything

Download the MATLAB function files from Canvas (NRZGen.p, RZGen.p, ManchGen.p and BiPGen.p), these functions can be used to line-code your bits. The functions have the syntax given in Table I.

Encode your 200 random bits using all six of these line-codes:

Use a bit period of 2 msec for each of these. Make sure to select an appropriate simulation sampling rate (fs) for this.

Plot these line-coded symbols in both the time and frequency domains.

Also called baseband mapping, constellation encoding is used to convert single bits in a digitised bitstream to symbols that can be represented by amplitude and/or phases of a carrier.

Constellation diagrams are used to visually show this process and can be used to show the encoding of both PSK and QAM signals. Figure 2 shows typical constellations for 16-PSK and 16-QAM modulations.

For this task, use the qammod() and pskmod() functions to encode all possible values for the following modulation schemes:

Plot these 8 constellation diagrams (real vs imaginary parts as points) on new MATLAB figures (use subplots to do this).

So far the previous tasks have covered baseband encoding and constellation mapping. The following tasks will consider how we can use baseband encoded signals to modulate quadrature carriers to create M-PSK and M-QAM signals.

The principle behind quadrature PSK/QAM modulation is that the quadrature and in-phase encoded signals can be independently DSB/SC modulated onto sinusoidal and cosinusoidal carriers respectively and then added together before being transmitted over a channel. This is shown in figure 3.

These carriers are of the same frequency but 90o phase shifted (in quadrature to each other and therefore orthogonal) this means the carriers cannot interfere with each other when added together in the transmission channel.

Mathematically quadrature modulation can be given as:

where Im is the in-phase component of the M-level encoded data and Qm is the quadrature component.

On Canvas is the MATLAB Workspace file ‘lab4_workspace.mat.’ This file contains the I and Q streams for binary data originally generated at Rb = 8000 bits/sec which has been encoded using the following methods:

These variables contain the outputs of the two Digital to Analogue converter blocks shown in Figure 3 (Im and Qm).

Use the time array given to you in this Workspace file (t) and plot the I-branch signals on new MATLAB figures together with their spectra (use the frequency array (f) to plot this). Take note of the first-null bandwidths of these.

Subtract the quadrature signal from the in-phase signal as shown in Figure 3 and display these modulated signals in both the time and frequency domains.

View All Reviews
EEET2254 Communication Enginee... has been added in your library.