Referencing Styles : APA | Pages : 31
Task Conduct financial and economic appraisal of competing project proposals. Purpose To investigate the value and limitations of financial and economic evaluation approaches in determining the viability of proposed projects and establish credible business cases. Scenario Canberra’s airport has been recently upgraded to the status of an international airport. Runways have been extended and widened. Air traffic control systems have been enhanced. Terminal and maintenance facilities hav ...

To investigate the value and limitations of financial and economic evaluation approaches in determining the viability of proposed projects and establish credible business cases.

Canberra’s airport has been recently upgraded to the status of an international airport. Runways have been extended and widened. Air traffic control systems have been enhanced. Terminal and maintenance facilities have been significantly upgraded. An unfinished part of the strategy of the Australian Capital Territory (ACT) Government to upgrade Canberra’s airport to international status involves improving road access from the town centres of Civic and Woden to the airport.

After years of planning by the ACT Government and an extended process of public consultation, two options for these road access upgrades remain. They are known as K1 and K3:

a. K1 involves new freeways with overpasses/underpasses at major arterial road intersections; and

b. K3, known as the ‘do nothing’ option, involves little more than minor works and upgrading of existing intersections.

Details of the staging of the proposed construction, timings, and estimates of the relevant costs and benefits are given at Tables 1 and 2.

Table 1 shows time distribution of costs and benefits. For example, ‘15%’ for Right of Way, Year 1, means that 15% of the total Right of Way cost. For annual costs or benefits, the ‘#’ indicates their uniform spread over time. For example:

• ‘Construction disruption’ occurs in years 0 to 6, but not thereafter;

• ‘Accident savings’ do not commence until Year 7;

• ‘etc’ indicates that the costs or benefits continue into the foreseeable future. It is assumed that costs and benefits will accrue for a lifetime of 30 years 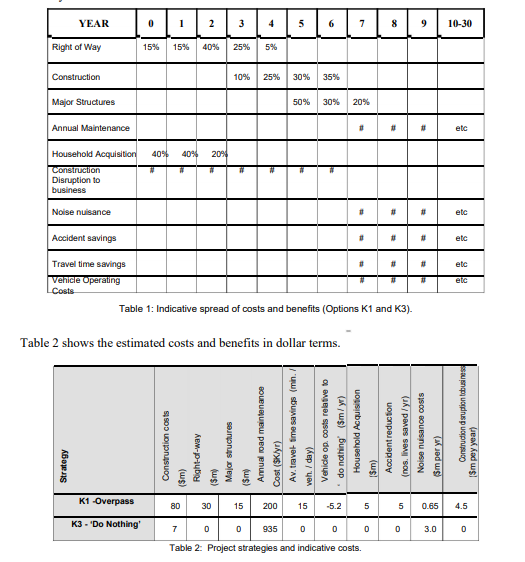 1.Road and intersection costs which are common to both strategies.

2.Social and environmental costs, which are common to both strategies.

3.Maintenance costs for the ‘do nothing’ option are ignored until the other option is ready at end Year 6.

Discount rate recommended by the Federal Treasury Department for economic evaluation is 3.0% pa.

The Dept of Urban Services guidelines apply a value of $1.5m per life saved, and a value equal to average wages to travel-time savings.

Inflation is expected to average 2.75% per annum over the next 30 years

The ACT Government has a AAA+ credit rating and can borrow funds at 4% interest for a 30- year loan.

A press release by the ACT Really Green Party argues that the Department of Urban Services is undertaking a ‘whitewash’ exercise to cover up impact on the very rare seven-legged pink spotted spider, which has been allegedly seen in the vicinity of the planned overpass. They propose that the area be declared a world heritage site.

The Canberra International Airport Consortium responded with a press release to the effect that ‘who gives a damn about pink spotted spiders’, and noting that the K1 option would make viable the proposed $100m industrial park, expected to contribute $50m per year to the ACT economy. (Note that the Council of the adjacent border city of Queanbeyan has been strenuously bidding for this industrial park and is expected to be successful if the freeway option is defeated).

Concern has also been raised at the possibility of exposure of motorists to legionnaires disease if trapped in the proposed tunnel as a result of traffic accidents.

The Leader of the Opposition has criticised the Minister for Urban Services for evaluating a ‘do nothing’ case when it is obvious that he will have to do something.

Average weekly earnings in the ACT are based on $58,000 per annum.

Average top quartile weekly earnings are based on $93,000 per annum.

Average bottom quartile weekly earnings are based on $28,000 per annum

Current annual average daily traffic is 15,000, predicted to rise by 3% per annum for the ‘do nothing’ case.

Generated traffic for the K1 option is forecast to be 1% per annum higher than for the ‘do nothing’ case.

1. You are an engineer working with the ACT Government’s Department of Urban Services (DUS). You are tasked with undertaking an economic and a financial evaluation of the options K1 and K3.

a. Calculate the net present value of each option and recommend the way ahead based on:

i. a financial perspective

b. What is the relevance of the inflation rate in this question?

c. What is the relevance of the ACT Government’s borrowing rate in this question?

d. What is the relevance of generated traffic in this question?

2. For option K1, develop a brief business case exploring the costs and benefits of the proposal. In answering this question, you must consider:

a. Confidence levels on the project costs and benefits.

b. How susceptible the business case will be to change and emergence

c. Likely criticisms of the proposal (especially from hostile stakeholders)

View All Reviews
ZEIT8302-Project Administratio... has been added in your library.