Description Of Mycelium and Its Function

What is Mycelium? Give a detailed description of its functioning.

What is Mycelium? Give a detailed description of its functioning.

Mycelium is the vegetative part of a fungus or fungus-like bacterial colony, consisting of a mass of branching, thread-like structure called hyphae. As the hyphae grows, it becomes longer and branches off, forming a mycelium network visually reminiscent of the branches of tree.

The structure of hyphae consists of at least one cell which is encapsulated by a protective cell wall typically made of chitin and internal septa, which serve to divide the cells. Septa are important as they allow cellular organelles (e.g., ribosomes) to pass between cells via large pores. However, not all species of fungi contain septa. The average hyphae are approximately 4 to 6 microns in size.

In order to understand the structure of mycelium the function of fungi needed to be learnt first. Fungi are the specialized eukaryotes that has the ability break every complex structures in the nature. It has cells walls rich in chitin and utilized the asexual reproduction system through spore release. The chitin is a hard material found in the exoskeleton of arthropods and the cell walls of fungi. The spores released during the asexual reproduction system has the ability to turn it into the mycelium. Though the asexual unit of the mycelium joins with another mycelium to form a dikaryotic mycelium. Thereafter these mycelium produces the fruiting body which more commonly known as mushrooms. However the fruiting body occurs only when the proper exchange of nutrients, gas exchange and temperature available in adequate numbers to produce them. In fact the drought like condition or too moist areas are not suitable or conductive for the growth of the mushrooms

Mycelium are available in different sizes from tiny to as large as forest area. The mycelium are made up of rigid cell walls which allows them to move through the soil or other environment that requires extra protection. Under the observation made with a microscope the mycelium looks a like a small tree before maturing into fruiting body as shown in Figure: 1.0 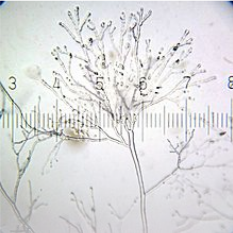 The mycelium the permanent and most important part of fungus. The mycelia network that spreads out from a fungal spore can extend over and into the soil in search of nutrients. The ends of some mycelia terminate as mushrooms and toadstools.

The growth of mycelium can be extensive. In the forest of Michigan a form of honey fungus is found, which began from a single spore and grows mainly underground, which is estimated to cover about 40 acres. The mycelia network is thought to be cover over the 100 tons of weight and is at least 1500 years old.

Mycelium extends the area in which a fungi can finds the nutrients. The fungi are the stationary organism whereas the mycelium grows outwards to look for nutrients and water. The nutrients like nitrogen, carbon, potassium and phosphorus which lead the mycelium to transports to the fruiting bodies in order to continue the production of biomass and initiate its growth.

The initial hyphae which is produced by a fungus has only one copy of each of its chromosomes. Hence, it is haploid. The resulting mycelium is also a haploid. The fusion may occurs between two mycelia when the haploid mycelium meets another haploid mycelium of the same species. After the fusion the cells then contains two nuclei. In distinction to plants and animals where the nuclei would fuse forms a functional nucleus contains two copies of each chromosomes called as diploid state. The two nuclei in the fungal cell functions separate from each other and remain autonomous.

The fungus absorbs nutrients from the environment through the mycelium. The process is performed in two different stages. In the initial or the first stage the hyphae secrets enzymes over the food source to break down the biological polymers into smaller units such as monomers. These monomers are then absorbed into the mycelium by facilitated diffusion and active transport.

Mycelia are vital in terrestrial and aquatic ecosystem for their role in the decomposition of plant material. The mycelium contributes to the organic fraction of soil and their growth releases carbon dioxide back to the atmosphere, as shown in the carbon cycle in Figure: 2.0. Mycelium will entangle the roots of plants and trees and nourish the plant life. The mycelium helps the plants to absorb water and nutrients as well as build up the immunity of the plans and trees. Mycelium are found on the tree roots which creates direct connection with the roots to exchange nutrients. 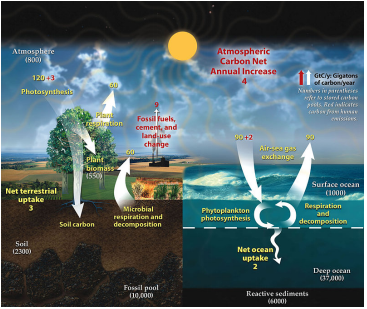 Mycelium is an important food source for many soil invertebrates.  Ectomycorrhizal extramatrical mycelium, as well as the mycelium of Arbuscular mycorrhizal fungi increase the efficiency of water and nutrient absorption of most plants and confers resistance to some plant pathogens.

Very good and fulfilled the requirements. l will return for other assignments. Thank you

View All Reviews
Description Of Mycelium and It... has been added in your library.