The molecular shape of the double-stranded DNA molecule is described as double helix. The double helix molecular structure of DNA was first described by Francis Crick and James Watson, in the year 1953, and it was published in the journal named as Nature. In the year 1962, for the discovery of the double helix structure of DNA, Watson, Crick and their colleague Maurice Wilkins won a Nobel Prize in Physiology or Medicine. One other person who contributed to this discovery was Rosalind Franklin but, she was acknowledged by Crick after her death.

The molecules that comprises the DNA is known as nucleotides. The composition of the nucleotides is a phosphate group, a sugar group in addition to a nitrogen base. Furthermore, there are four forms of nitrogen bases which are adenine (A), thymine (T), guanine (G) and the last one cytosine (C). The instructions or the genetic code of the DNA is determined by the order of the bases. The human DNA consists of around 3 billion bases and, according to U.S. National Library of Medicine or NLM, more than 99 percent of the bases are similar for all people. The genes are formed from the DNA sequence of the nucleotides and like the English alphabets that are used to form a word, the nitrogen bases are also used to form the genes. Genes are the language of the cells which tells them how to make protein. The translation of the genetic information from the DNA to proteins is done by RNA. 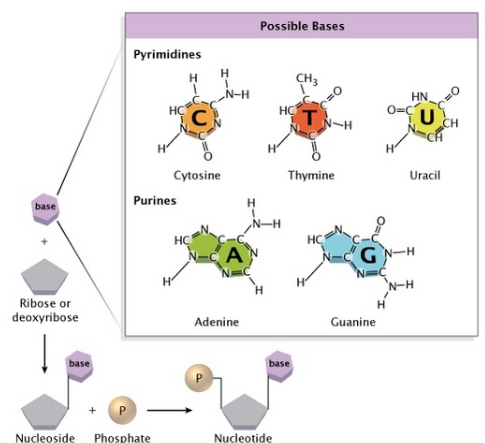 The double helix structure is formed because the nucleotides are attached together in order to from two long strands into a spiral structure. The two stands are connected by hydrogen bonds and this hydrogen bond also exist on the outer edges of the nitrogen bases that are exposed and available for protein hydrogen bonding. These hydrogen bonds help other molecules to access the DNA molecule and this also includes the proteins that helps in the replication of the DNA and the expression. The double helix structure can be imagined as a ladder, where the phosphate and the sugar molecules are the sides of the ladder, and the nitrogen bases would make the rungs. The bases on one strand pair with the bases on another strand and they follow a pairing rule which is adenine (A) is paired with thymine (T), and guanine (G) is paired with cytosine (C).

It is observed that the DNA strands are very long and without the proper packaging the strands cannot fit into the cells. Thus, a coiled structure is formed by the DNA in order to fit in the cells and this coiled structure is popularly known as chromosomes. One chromosome contains a single strand of the DNA molecule. The chromosomes can be found inside the nucleus in a cell and humans have 23 pairs of chromosomes. The double helix structure of the DNA follows an anti-parallel structure, which implies that the 5’ end of one strand is paired with the 3’ end of the complementary strand and vice versa. 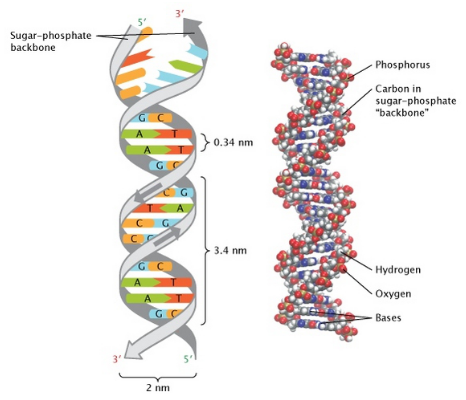 The comprehensive set of information that a DNA of an organism contains is called its genome. The information of all the proteins that an organism will ever produce is carried by the genome. The term “genome” is also used to describe the DNA that carries this information. The amount of information that a genome contains is stunning: for an example, a typical human cell contains 2 meters of DNA. Only the four alphabets of the nucleotide are used, the nucleotide sequence of a very small human gene occupies a quarter of a page of text, while the complete sequence of nucleotides in the human genome would fill more than a thousand books. In addition, to the critical information that is carried by the genome, it also carries the instruction of about 30,000 different proteins.

During each cell division, the genome must be copied by the cell in order to pass the genome to both the daughter cell. The principle of coping of the genome is also clear because of the discovery of the DNA structure. The sequence of the nucleotide bases in one strand of DNA is complementary to its partner strand and each strand acts as a template, for the creation of new corresponding strand.

View All Reviews
Double Helix Structure Of Dna has been added in your library.