Interquartile Range and A Boxplot To Describe A Distribution

What is an Interquartile Range? Box Plot interquartile range & How to find it. Use a five-number summary and a boxplot to describe a distribution.

What is an Interquartile Range? Box Plot interquartile range & How to find it. Use a five-number summary and a boxplot to describe a distribution.

The first step in drawing a box plot is to arrange the data set. The data set needs to be arranged from smallest to the largest. This is similar to that is done before computing median where data are arranged in ascending order.

Lastly, the difference between upper and lower medians needs to be computed by subtracting lower median from the upper median. This gives the desired value of interquartile range.

Five number summary and box plot of a distribution

The five number summary measure belong to the set of descriptive statistics that provide information such as variability, nature of distribution and such other related to the data set. The five number summary measure include five most important percentile of the data set. The five measures are the sample minimum, the first quartile or lower quartile, median, the third quartile or upper quartile and the sample maximum. Each of these five measures are described below.

Median: Median refers to the second quartile of the data set.  It is the value that separates higher half of the sample data from that of the lower half. For a given data set, median is known as the middle value of the data.

Box plot consisting the five summary measure is standard method of presenting distribution of the dataset. In the simplest form of box plot, there is a central rectangle expanding from the lower quartile (first quartile) to the upper quartile (third quartile). The rectangle actually indicates the interquartile range. Inside the segment, there lies median of the data set. The sample maximum and the sample minimum are located above and below the box respectively. A box plot consisting five summary measures looks as follows 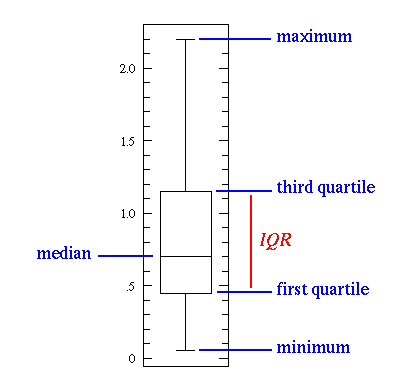 A box plot helps to identify whether a given dataset is symmetric or not. In case, the data follows a symmetric distribution, then it is more or less same on both side if cut down from the middle of the box. In case the distribution is skewed a lopsided box is obtained. In this case, median divides the box into unequal parts. If longer part lies to the right, then it is positively skewed. If longer part lies to the left, then it is negatively skewed.

View All Reviews
Interquartile Range and A Boxp... has been added in your library.