What is the Lewis dot structure for SO2?

What is the Lewis dot structure for SO2?

Lewis structures are also known as the electron-dot structure or the electron-dot diagrams. It helps to highlight the bonding between the atoms of a molecule or the lone pairs of electrons that might exist in the molecule. A Lewis structure can be drawn for designing any covalently-bonded molecule and other coordination compounds. Lewis structure helps to highlight each atom in the structure of the molecule by the use of its chemical symbol. The lines are drawn in between the atoms that are bonded to one another (pair or dots are mainly used to highlight the bonding as a substitute of lines). Excess of electrons that give to the formation of the lone pairs are mainly represented as pair of dots and they are placed next to the atoms under which they are placed or located. The Lewis structure of an individual atom is mainly drawn by placing a dot around the atom against the each of the available valance electron. There are four different positions that are available drawing of dots and generate the Lewis structure. In the majority of the cases chemists draw them on the top or left or bottom or right of the atom.

Sulfur or Sulphur Dioxide is defined as the entity of bond that stays in between the sulphur and the oxygen atoms. The formula is SO2.  The shape that reduces the repulsions of the electronics is mainly adopted by the molecule to from the structure. The molecular shape of the sulphur di-oxide (SO2) is same like the molecular geometry of carbon dioxide (CO2). The bonding of SO2 is: O = = S = = O.

In the outer level of the sulphur has six electrons and oxygen has four electrons. Of them one electro is used for electron bonding. So the total number of the electrons that is 10 has five pairs. In order to make bonds, four pair required so one pair remain alone. The two double bonds are used two pairs each and thus helping to form a single unit.

As a any single unit alone cannot pair, it is not counted under the description of the shape of the electron. Thus it can be summarised that the molecular shape of the sulphur di-oxide or SO2 is V-shaped or vent. 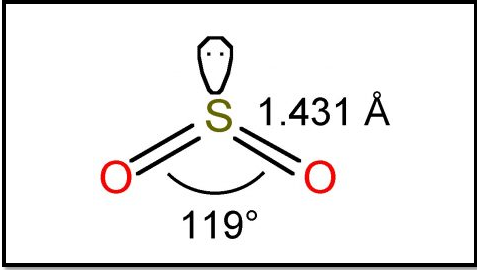 The electron geometry is formed in the shape of the trigonal planner. The three different pairs of bonding electrons are arranged in the plane and are placed at an angle of 120-degree. As one of the pair remain alone, the remaining two double pairs are bonded and give rise to a bent shape. In order to create a Lewis structure of SO2, the eight valance electrons of sulphur must be arranged. The formal charge of every atom must also be calculated. Sulphur and oxygen has six valence electrons each and since there are two oxygen atoms, the total number of valence electrons will be 18.

The calculations of the formal charges are shown below:

In order to design the structure octet rule must be designed and preference must be given to electronegative element. Here the most electronegative element is oxygen thus placing the double bond and single lone pair with each of the atom of oxygen. The structure will be completed by placing the remaining valence electrons on the central atoms that is four bonded pars and four lone pairs = (4+4) x 2 = 16. The total number of remaining valence electrons will be 18 – 16 = 2 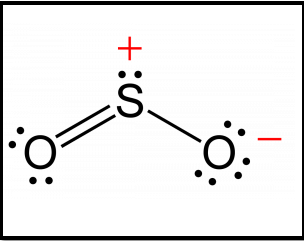 View All Reviews
Lewis Structures has been added in your library.