Express the relationship between the torque and the angular acceleration in a form of equation?

Express the relationship between the torque and the angular acceleration in a form of equation? 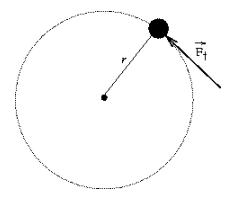 The above diagram can easily be used to study the relationship between torque and angular momentum.  Assume that a mass ‘m’ is moving in a circular path having the radius ‘r’, a force which is tangential is acting upon it which is denoted by Ft as illustrated in the figure above. However, using Newton’s Second law a relation can be established between Ft with the tangential acceleration which is at = rα, where the term ‘α’ denotes the angular acceleration.

The torque at the centre of rotation is due to the Ft  can be stated as: Torque is equal to tangential force multiplied by the radius of the circular path. Therefore, it can be stated that

Very good and fulfilled the requirements. l will return for other assignments. Thank you

View All Reviews
Relationship Between The Torqu... has been added in your library.