What Are Lewis Acids And Bases? How Can One Recognize In Chemical Reactions

What are Lewis acids and bases?

Some molecules such as BCl3 are  electron deficient molecules, have less than an octet of electrons around one atom and these substances have a strong tendency for gaining of an additional electrons pair and this achieved by reacting with other substance that contain a lone pair of electron. The definition of Lewis is less obstructive than both the Brønsted–Lowry and the Arrhenius definition, which grew out of the observation from him of the tendency. A general Brønsted–Lowry acid-base reaction that is depicted using the Lewis electron symbols is provided below:

The H+ proton has no valence electrons and can be considered as a Lewis acid because it can accept a lone pair of electron to form a bond. The proton is known to react with bases. For an example, the neutral compounds of boron, aluminium and other element of Group 13, that possess only six valence electrons, and have a very strong affinity for electron pairs. These compounds are potent Lewis acids that react with an electron-pair donor such as ammonia in order to form an acid–base adduct, which is a covalent bond. An example is given below:

What is coordinate covalent bond?

An example of Co-ordinate covalent bond

The reaction between ammonia and hydrogen chloride

The NH4+ are formed due to the transfer of a hydrogen ion from the hydrogen chloride to the lone pair of electrons on the ammonia molecule. 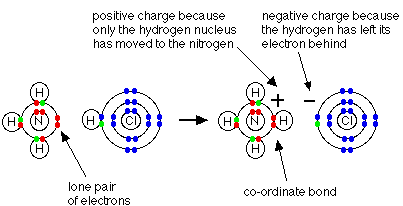 How to identity Lewis acids and bases from a chemical reaction

The given things are the reactants and the products.

Solution: In the above given example, in BH3, there are six valence electrons in boron. Thus, in this case it is electron deficient and can accept a pair of electrons. Like the oxygen, the sulfur atom in the compound (CH3)2S has two lone pairs of electrons. So, the (CH3)2S compound is capable of donating on electron pair to the boron atom of BH3. Thus, in this example, the Lewis acid is BH3 and the Lewis base is (CH3)2S.

The given are the reactants and the products.

View All Reviews
What Are Lewis Acids And ... has been added in your library.