What Are Sleet? How Is Sleet Formed? What Is The Difference Between Snow And Sleet?

What are Sleet? How is sleet formed? What causes sleet? What is the difference between snow and sleet?

What are Sleet? How is sleet formed? What causes sleet? What is the difference between snow and sleet?

Sleet can be defined as the mixture of rain and snow which is common phenomena in Winters. The sleet in order words is a form of winter precipitation. Sleet are generally ice pellets that have a diameter of 5mm (0.2 inch) which is formed when the raindrops freezes as they fall or the freezing of the melted snowflakes. This weather phenomena are commonly known as sleet in different parts of Great Britain and in some parts of United States. The term sleet can be more clearly be called as glaze which refers to clear ice on objects. Sleets are often seen to accumulate on ground when there is heavy sleet fall. The sleet which are accumulated can be measured in the same manner as the snow depth are measured.

How is Sleet Formed

Rain and snow mixed, snow that partially melts as it falls can be a caused of one type of sleet which is formed in the parts of UK, Ireland and most of the Commonwealth countries.

Ice pellets which is one of three forms of precipitation in wintry mixes while the other two forms for the formation of sleet is snow and freezing rain. One of the main causes which can be identified for the formation of sleet is due to the warmer layer which exist after the freezing layer in the atmosphere. This type of climate is much more common in wintry season and the same is associated with rainy season climate. The formation of sleet depends on the process of precipitation and water in the atmosphere. If the water condenses too much then the same would come down as snow or hail. If the condensation is followed by contact with a warn air current then there would be partial liquidation of the snowflakes which would then result in the formation of Sleets. The sleets which are formed often accumulate on the ground in the same manner as snow. 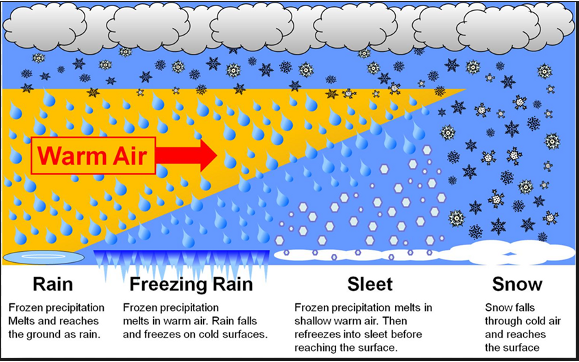 The above figure shows the different forms of climate changes in terms of rains which are further shown as normal rain, Freezing rain, sleet and snow. There exist minor differences between each of the form of rain which is shown in the image above.

The main causes which can be identified for sleet occurrence is due to the changes in the climate conditions mainly during the winter season. Sleet usually forms from frozen rainfalls or from partially frozen snowflakes. The causes for sleet is mainly attributed to the presence of warm layer of air in the atmosphere or presence of ice cold winds just in between the atmosphere and ground. This results in partial solidification of raindrops which causes the formation of sleet. Sleet can be measured in the same manner as snow depth are measured from the ground. The first thing to know regarding sleet formation is that the same takes place in the atmosphere. The space between the ground level and the outer space is the atmosphere. The atmosphere also supports the water cycle whereby the water evaporates from the ground and then again condenses and return to the ground in the form or rain, hail, snow, sleet. There are five layers in the atmosphere out of which the troposphere is the closet layer to the ground and this is the layer in which all the weather and precipitation also takes place in this layer. The other layers of the atmosphere except the exosphere are colder as it is known fact as the height increases, it gets colder. It is also a general fact that as much higher you go, the cooler it gets. It is there in the top layer of the troposphere that evaporated water from the ground gets condensed and the same falls either as rain water or snow. The condensed snowflakes pass through a warm layer of air which results in the formation of sleet. Another alternative situation which takes place. The sleet formation on the ground occurs only when there is a heavy sleet. This is a common phenomenon in the regions of Great Britain where the streets get covered with sleet.

Difference between Sleet and Snow

The difference between Sleet and Snow are not much but are minor and the same is related to the climatic changes which affect the operations of the business. The difference between sleet and snow occurs at the time of precipitation of water vapours in the clouds and both the form of rain are quite similar in nature. All of these is started in the atmosphere at the stage of precipitation of the water vapours when the temperature becomes cold enough for formation of rain of ice balls. The condensation of rain water leads to solidification of water drops into ice and snow which reaches the surface of the earth in the same manner. In the case of snow, it is formed in clouds that are at a low temperature which effectively. As per the required temperature, 32 degrees F or lower needs to be maintained in order to make snowflakes. In such a situation snow falls from the air. However, in case if the precipitation starts as snow initially and then warms up due to the air which is present in the atmosphere and later cools down further to refreeze than it becomes pellets which are also known as sleets. Sleets are quite different from freezing rain as the same is formed due to the presence of warm air in the atmosphere. It is after the rainwater drops which is resulted from me

View All Reviews
What Are Sleet? How Is Sleet F... has been added in your library.