A cuboidal wooden block contains 189 cm3 wood. If it be 7cm long and 4.5cm high, find its breadth.

A cuboidal wooden block contains 189 cm3 wood. If it be 7cm long and 4.5cm high, find its breadth.

The solid sides of a rectangle are cuboids. Cuboid is a shape of three-dimensional or shape of polyhedron. Cuboids consist of six rectangular shaped sides or edges, which are called faces of the cuboids. Cuboid consists of 12 edges and 8 vertices. All the faces are rectangle in shape and the corners of the cuboid are vertices. These vertices are 90 degree in angle. It is a closed geometric figure, which is three-dimensional and it is bounded by a region, which consist of six rectangular planes. 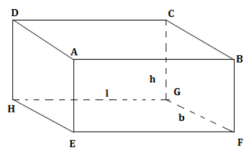 The point, where the three edges intersect is called the vertex of the cuboid. A cuboid consists of eight vertices. A, B, C, D, E, F, G and H are representing the vertices of the cuboid in the above figure. The twelve edges or the sides are grouped in three groups. In one group all, the edges are equal. Therefore, there are there different groups such as length, height and breadth.

The area of the surfaces of the cuboid is equal to areas of the cuboid of the rectangle faces. If it is, consider to have length as l cm, breadth as b cm and height as h cm,

Let, the length is  l, breadth is b and the height is h.

The face diagonals length of the cuboid are:

The space diagonals length of the cuboid is

The height of the wooden block of the cuboid is = 4.5 cm

The volume given for the cuboid block = 189 cm3

Therefore, the breadth of the wooden cuboidal block will be 6 cm.

View All Reviews
A Cuboidal Contains 189 Cm3 Wo... has been added in your library.