Bank Liquidity And Bank Solvency: How Do You Calculate Solvency And Liquidity?

What is bank liquidity and bank solvency? How do you calculate solvency and liquidity? What is the difference between solvency and insolvency?

What is bank liquidity and bank solvency? How do you calculate solvency and liquidity? What is the difference between solvency and insolvency?

In economics, the word Liquidity is commonly known for the features of how quickly a firm can able to purchase or sell an asset without effecting an extreme level of changes in the Assets price. Whereas the solvency can be narrated as the capacity of an organization to provide its long term expenses and to meet its financial obligations, also including the purpose to fulfill organizations’ long term development and growth.

Banks usually are providing money to the depositors according to their requirements on time. For such purposes, banks need to maintain a certain level amount of cash in their capacity always, in the same way sometimes banks required to provide loan to some customers according to their requirement for such reasons banks also needed to maintain a certain amount of cash. This concept of maintaining a certain level of money in bank treasury is known as Bank Liquidity. If the organizations financial conditions are in solvent situation then a solvency certificate generally provided to the organizations and that is one of the prove that company is in a growing and stable situation and there may no chance of insolvency can be occurred easily.

In general, the solvency means the ability of an organization to meet its obligations. For the bank, obligations are like, the daily customers to who required to make payment according to their needs from their depositing amount, the customers to whom needs to provide their required loan amount, etc. Banks, how efficiently meet those types of obligation from its treasury amount and also how to maintain its growth, in the long run, are commonly known as the solvency power of banks.

Solvency is usually used to measure the organizations capacity to meet its long-term obligations. Such solvency is computed through the ratio analysis. The comparison between the numbers of cash flows to liabilities is used to calculate the ratios and such accounting data generally derived from the income statement and balance sheets of the organizations. The necessary steps need to follow for the purpose of calculating solvency ratio are as follows; Firstly, Append all the monetary and non-monetary expenses after and incomes to generate the number of cash flows by the organization. Secondly, Sum up all the long-term as well as the short-term obligation of the business for the purpose to compute companies outside obligations and in the last, make a divide in the adjusted net income with the liabilities of the company for the users to calculate the solvency of the organizations.

The higher percentage rates insolvency generally indicating the increasing abilities of the company to meet its obligations and in case of lower shows the inabilities of the organizations regarding such liabilities. To understand the effect of solvency ratio an example of calculation solvency ratios for Target corporation & Wal-Mart for the fiscal year 2017 given below; 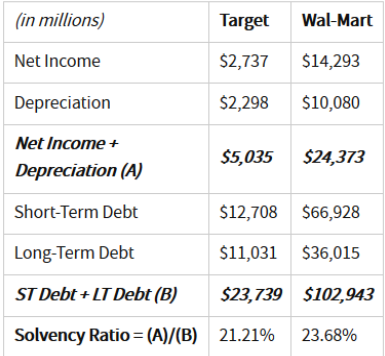 Liquidity in general use for the purpose to compute how efficiently a company can transform its current assets to cash so that it can be able to make payment of its short-term liabilities. Such liquidity is calculated using the calculations of different liquidity ratio like current ratio, acid-test ratio, Absolute Liquidity ratio, and Basic defense ratio.

Current ratio generally computed through the divide, Current Assets by Current liabilities for the financial strength of the company. Its need to be 2:1 to consider itself as an ideal ratio.

Acid Test ratio is the second-best ratio calculate to measures the liquidity position of the company. Dividing the Quick rate (Deducting the number of inventories from the current assets) from the current liabilities such acid test ratio is generally computed. Such ratio should always be 1:1 to consider it as an ideal one.

For the purpose to compute the marketable securities available in the company’s current assets to meet the liabilities of the company, generally Absolute liquidity ratios are calculated. An example is given to understand the liquidity conditions of a company during a particular period; 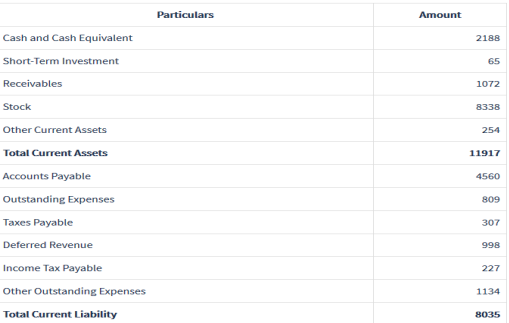 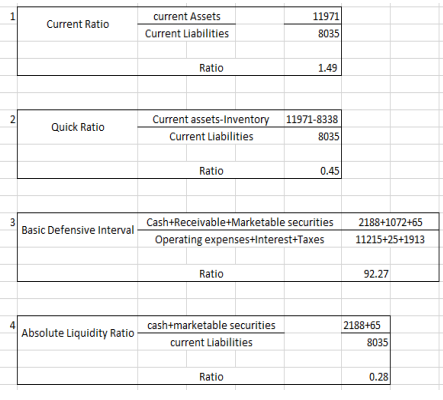 In general, the organization, when meeting their obligations using the available cash liquidity, is called the organization is in the position of solvency. On the other hand, when the company is unable to meet its obligation due to unavailability of proper liquidity cash positions is called insolvent. For solvency, there is no obligation for the company, but in the case of insolvency, there has some responsibility. There is no requirement to sale the company’s assets to meet its obligation, when there is a situation of solvency but in case of bankruptcy, the company must need to sell its assets to meet its obligations. In the case of solvency, there is no option of certificates, but when an organization is considered as an insolvent, they must need to declare themselves as a bankrupt and for such they need to obtain an insolvent license. In the case of solvency, the current liabilities of a company generally not exceeding its existing assets positions but in a situation of insolvency usually, the liabilities exceed the Assets balance of an organization.

View All Reviews
Bank Liquidity And Bank Solven... has been added in your library.