Ans: Cell is considered to be a basic unit of life of various organism. Similar to human and animals, plants which comprise of various cells. Plant cell is mainly surrounded by a cell wall and there are various cell organelles which provide shape to the plant cell. It will help in maintaining proper function for any given cell. Plant cells are considered to be eukaryotic which has a true nucleus along with some specialized structure that is known to be organelles. It is mainly used for carrying out some of the specific function.

Plant cell is known to be eukaryotic cells which can vary with respect to different factors from some eukaryotic organism. Both kind of cell that is plant and animal come up with nucleus along with some similar organelles. One of the key elements of a plant cell is the presence of a cell wall outside the cell member.

Plant cell is known to be regular and comparatively much larger in comparison to animal cell. In plant and animal cell, there are eukaryotic which share few cell organelles. Plant cell is considered to be very much distinct in comparison to animal to cell that can satisfy the various function. There is list of differences which can be understood when the cells are completely examined under the microscope. 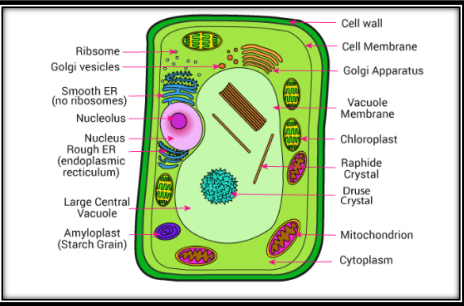 Similar to the organs in the body, plant cell structure is merely inclusive of different components which are defined as cell organelles. It can easily perform a list of function where people can sustain on itself.

Cell wall: It can be defined as a rigid layer which comprises of cellulose, lignin, pectin and lastly hemicellulose. It is generally outside the whole cell membrane which comprises of proteins and cellulose. Primary function of cell wall is needed for protecting and providing structural support to the cell. Plant cell is merely involved in protecting cell from any kind of mechanical stress. It will help them in providing form and structure to the cell. This will filter all the molecules that passes in and out of the cell. Cell wall is mainly guided by the help of microtubules which comprises of three layers that comprises of primary, secondary and middle lamella. Primary cell wall is mainly formed by cellulose that is laid down by enzymes.

Nucleus: It can be defined as a membrane-bound structure which exists in the eukaryotic cells only. The major function of the nucleus is all about collecting DNA or required information which is needed for cell division, growth and metabolism.

Vacuole: It tends to occupy around thirty percent of the cell volume in the mature cell. Tonoplast is a membrane which aims to surround the vacuole. The major function of vacuole is storage which is needed for getting turgid pressure against cell wall. The central vacuole comprises of cell sap and is a mixture of salts, enzyme and other substances.

Ribosomes: It is considered to be smallest membrane bound organelle that comprises of both RNA and protein. It is the site of protein synthesis which is also defined as the protein factory of the cell.

Mitochondria: It is a double-membrane organelle which is found in the cytoplasm of the cell. It can provide energy by breaking down sugar molecules and carbohydrates. It can be also referred to the “Powerhouse of the Cell”.

Lysosomes: Lysosomes are defined as the suicidal bag which can easily hold digestive enzyme in enclosed membrane. It can perform some of the function like disposal of cellular waste by digestion of worn-out organelles, foreign bodies in the cell.

List and describe the different types of plant cells.

Cell of matured plants tends to become specialized so that it can perform certain number of function which is important for the survival. Some of the plant cell is mainly used in the transportation of nutrients, water and other materials needed for storing foods. Some of the specialized plant cell is merely inclusive of parenchyma, sclerenchyma, collenchyma, xylem and phloem cells. Various kind of plant cell has been described below:

Collenchyma Cell: It can be considered to be hard or rigid cell which tends to play a key role in providing proper support to plants at the time of restraining growth. It mainly happens as a lack of hardening agent in some of the primary walls.

Sclerenchyma cell: The given cells are considered to very much rigid in comparison to the collenchyma cell and this happens as a result of hardening agent present in it. Cell is mainly used in the plant roots and mainly aims to provide support to the plants.

Parenchyma Cells: Parenchyma cells aims to play a vital role in the plants. They are living cells of the plants which are needed for the production of leaves. In addition, the exchange of gases, food storage of organic products and cell metabolism. a is considered to be much more flexible other than as it is thinner in nature.

Xylem Cells: It is needed for transport of cell in vascular plants. It will help them in the transport of water and minerals which is collected from roots to leaves and other parts of plant.

Phloem Cells: Phloem cells are another kind of transport cell which is found in the vascular plants. It can easily transport the prepared food by leaves to a different section of the plant.

View All Reviews
Define Plant Cells. Describe T... has been added in your library.