Definition And Structure Of Thymine In Detail

Describe the definition and structure of thymine in detail.

Describe the definition and structure of thymine in detail.

Thymine is stated to be one of the four significant part of the nucleobases present within the nucleic acid of the DNA, mostly represented by the letters G – C – A – T. The other three are depicted as adenine, guanine and cytosine. Thymine is also stated as 5-methyluracil, a pyrimidine nucleobase. In RNA thymine is replaced by the nucleobase uracil. When these are exposed to ultraviolet radiation such as sunlight the covalent bonds are formed between the adjacent thymine molecules on the same strand of DNA thus further creating thymine dimers. This process causes some damage thus causing the DNA to form ‘kinks’. This inhibits the normal function of the DNA, which cannot then be replicated or transcribed.

In most of the instances most cells are able to repair the damaged part of the DNA. This repair of the DNA. This can be achieved in two ways: by the repair of enzymes which is known as the photolyase that tends to break the covalent bond, using light as an energy-source for bond cleavage. This process is called photo reactivation and is possible in most organisms, although not in placental mammals.The second mechanism involves an excision enzyme, which removes the damaged section from a single strand of DNA. The excised nucleotides are then replaced by DNA polymerase and a final phosphodiester bond is formed by DNA ligase.

The formula of thymine is stated as C5H6N2O2. This is depicted as a heterocyclic, aromatic as well as organic compound. Heterocyclic compounds are basically identified as the ring structures are cyclic compounds that tends to form a string, which possess atoms of at least two different elements. An organic compound contains carbon, so a heterocyclic organic compound contains atoms of carbon as well as one or more additional elements such as sulphur, nitrogen or oxygen. The term aromatic describes a molecule which is cyclic as well as planar, with a ring of resonance bonds, which provides added stability within the molecule. This means that it does not break apart or react with other substances easily. 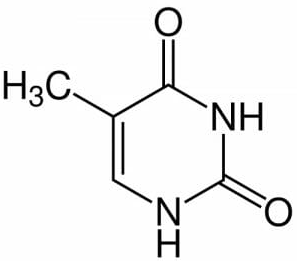 In the similar way, as the other pyrimidine, cytosine and uracil, thymine has nitrogen (N) at the 1’ and 3’, each one is bonded to hydrogen (H). The N molecule at the 3’ prime forms the glycosidic bond – the covalent bond which joins to the deoxyribose sugar to form the nucleoside, thymidine. At the 2’ and 6’ positions are carbonyl groups as well as at the left hand side is a double bond. Thymine has a methyl group at the 5’ position, thus distinguishing it from uracil, which has hydrogen at that position.

When a typical thymine auxotroph is deprived of thymine in an otherwise complete medium, its mass continues to increase in an unbalanced fashion by synthesizing RNA and protein but not DNA for a while. The cells stop dividing from the other ones thus forming prominent filaments of various lengths that exponentially lose colony-forming ability on agar plates but recover if thymine is added back before plating that is known as the liquid holding recovery phenomenon. The extent of killing is retarded by concomitant inhibition of protein synthesis, supporting the idea that plating efficiency is low because the cells are filamentous.

A multitude of reactions to thymine starvation associated with TLD can be classified as molecular or cellular. Among the molecular reactions are mutagenesis, induction of harboured prophages, and curing of plasmids, as well as breakdown, structural changes, and under methylation of DNA. Genetic recombination is enhanced, as well as non-conservative, repair replication takes place. The studies stated above in regards to thymine starvation as well as TLD are still not exhausted thus understanding various aspects of bacterial cell physiology. The complex as well as varied phenomena that the cell displays under complete removal of thymine from the medium, culminating in loss of colony-forming ability, are avoided by supplying it with limiting concentrations, as described below. The above study implies the basics of thymine which is basically depicted as a sector of study for the biologists. Moreover the thymine is a significant part within the DNA of any living organism.

View All Reviews
Definition And Structure Of Th... has been added in your library.