Definition Of Cube And Cuboid: Lateral Surface Area Of Cube

Definition of cube and cuboid

Definition of Cuboid- Cuboid is a shape that has three dimension and it is a three dimensioned geometrical figure that is generally bounded by the six rectangular regions. The below diagrams shows the diagram of a cuboid.

Definition of Cube- the definition of a cube can be defined as a solid that have equal length, breadth, as well as height that are all to be equal in measurement. It is a solid bounded six square planes that has regions on all the sides and all the side of the cube are known as the edges.

Faces included in cuboid- A cuboid is generally made of six rectangles in the cube and each of the rectangle on the cube is called the face. In the figure shown above, ABFE, DAEH, DCGH, CBFG, ABCD and EFGH are 6 faces that can be shown in cuboid.

The edges are known as the cuboid which is in line segment that comes between two adjacent vertices. In a cuboid there are 12 edges. The edges in a cuboid are AB, AD, AE, HD, HE, HG, GF, GC, FE, FB, EF and CD and they are opposite sides for the rectangle that are equal with the cuboid. 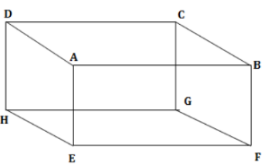 Formula of cube and cuboid

Surface area formulas of a cuboid-

Surface area of a cube

For calculating the total surface area of the cube, let us consider the side of the cube as the l. So the formula that are included in the cube states cube

Lateral surface area for the cuboid

The sum for the surface area included in all the sides includes top as well as bottom of the face of solid that is generally defined as the lateral surface area of that solid.

Lateral surface area for the cube

Let us consider that the cube having its side to be 8 cm.

Let us consider that the cube having its side to be 4 cm.

View All Reviews
Definition Of Cube And Cuboid:... has been added in your library.