In simple words, the likelihood of a neutral atom to gain an electron is known as electron affinity. So, the definition for electron affinity can be, the change in energy, which is measured in kJ/mole, due to the addition of an electron to any neutral atom, which is in the gaseous state, in order to form a negative ion. In context to chemistry and atomic physics, the term electron affinity denoted as Eea, for an atom or can be for a molecule, is the amount of energy that is released or spent, due to the addition of one neutral atom or molecule, which is in their gaseous state, in order to release a negative ion and some amount of energy. It can be represented as:

The equation that shows the electron affinity is equal to the negative change in the energy is:

Where, EEA is the electron affinity and ΔE is the change in energy. 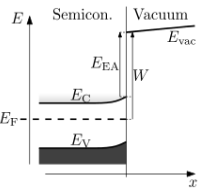 The property of electron affinity is only used to measure the atoms and molecule when they are in their gaseous state because, in case of solid state and liquid state the energy level can change if there is any interaction with other atoms or molecules.  Robert S. Mulliken first used a list of electron affinities in order to develop an electronegativity scale that can be used for atoms.

The usual expression for calculating Eea when an electron is attached is:

The expression follows the conversion:

View All Reviews
Definition of Electron Affinit... has been added in your library.