Definition Of Plant Cell and Its Functions

Nucleus: Nucleus is the largest organelle embedded within the cell. The nucleus is round in structure and is covered with double membrane which is called as nuclear envelope or membrane. The nucleus contains DNA that is deoxyribonucleic acid which contains the genetic information on specialized strands called chromosomes. The key function of nucleus is cell reproduction and metabolism and is referred to “control center” of the cell.

Mitochondria: Mitochondria are considered as the power house of the cell. Mitochondria are the tube-like round structured organelles. It is surrounded by double membrane where the inner-membrane is in a folded structure. The main function of mitochondria is to release food energy from the food molecules which needs to be used by the cell.
Endoplasmic Reticulum: It is the network of membranous canal which is filled with fluid. They act as a carrier for important materials transported throughout the cell. It is also known as the transport system of the cell. The endoplasmic reticulum is of types: rough ER and smooth ER

Ribosomes: These are the small particles usually found individually in the lining of rough ER and spread throughout the cytoplasm. Ribosomes are responsible for the production of proteins.

Central Vacuole: The central vacuole is the large vacuole present in plant cell. The vacuole is filled with fluid which is enclosed by a membrane. The vacuole acts as a storage compartment which stores water, inorganic and organic substances and waste products. 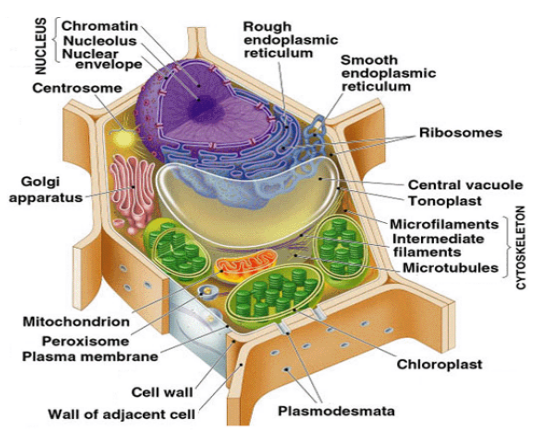 The difference between plant cell and animal cell

View All Reviews
Definition Of Plant Cell and I... has been added in your library.