Explain Ampere Law: How One Can Calculate Current That Produces a Magnetic Field

Answer: The Ampere’s law was introduced by André-Marie Ampère in the year 1826. This law is very useful, which is used to relate the net magnetic field along a closed loop and the electric current that passes through the loop. This law is derived from one of the equations by Maxwell in order to describe electromagnetic field.

In a long straight wire the magnetic field has more effects than one can imagine. For every segment of the current it produces one magnetic field likewise in a long straight wire, in addition the total field for every shape current is the vector sum of each and every field that is due in each segment. The statement that is made about the direction and degree of the field because of each segment is known as the Biot-Savart Law. In case of an arbitrary shape current, in order to sum up all the field, there is a requirement of the integral calculus. This gives rise to the more complex law which is known as the Ampere’s law. This law can relate the magnetic field along with the current in a very general way. The Ampere’s Law is also a part of the Maxwell’s equation, which provides the complete idea of the phenomena known as electromagnetic field and all the related topics under that. Considering the different perspective of different observers of the Maxwell’s equation it gave rise to the modern theory of relativity and it was realized that both electric field and magnetic field are different demonstration of the identical things.

The law given by Ampere is described as an arbitrary surface and a closed loop forming its border. This law is thus resonant of the Gauss’s Law, which involves the volume plus the closed surface with which the boundary is formed. Considering a closed loop, it may not be a circle also, which are broken into smaller elements ΔLi and a magnetic field Bi at each element. 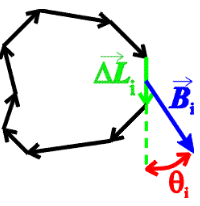 This is noted as the general statement of the Ampere’s law. In case of a wire the loop can be made into a circle also around the wire, hence the field will always be tangent to the circle, where cos θ = 1. The circumference for the circle with radius r would be 2 πr. In this case the Ampere’s law would be:

1. The enclosed net current is zero.

2. At any point, the magnetic field should be normal to the path that is being selected.

3. The magnetic field is zero.

Explain how one can calculate current that produces a magnetic field

The above provided equation is used in order to calculate the magnetic field. The calculation is done using the right hand rule 2.

The magnitude of the magnetic field that is produced by a long straight current carrying wire is said to be,

Here I is known as the current, the shortest distance to the wire is denoted by r and μ0 is the constant with value 4π 10-7 T . m / A is also known as the permeability of free space. The μ0 is known to be one of the elementary constants. The distance of the wire is very long so the magnitude of the field depends on the distance r and not on the position alongside the wire.

Calculate the current that is produced in a long straight wire which will produce a magnetic field that is twice the Earth’s strength at a distance of 5.0 cm from the wire.

Substituting the values in the above equation,

Explanation: It can be concluded that moderately large current can produce significant magnetic field at the distance of 5.0 cm from the long straight wire. The answer is provided in two digits because the field of the Earth is specified to only two digits in the given question.

The strength of the magnetic field that is being produced by the long straight wire that carries current is expressed as,

Here I is the current, r denotes the shortest distance to the wire and the constant μ0 has the value 4π 10-7 T . m / A, which is also known as the permeability of the free space.

In a current carrying loop of wire the magnetic field produced by that is shown in the figure below. 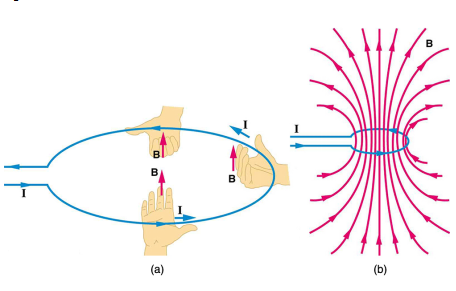 The direction and the magnitude of the magnetic field that is being produced is complex. The right hand rule 2 is applied here to determine the direction of the field of current but the mapping with the help of a compass along with the rules about the field lines that is given by Magnetic Fields and the Magnetic Field lines are required for more details. The magnetic field strength at the center of the current loop is given by,

Here R is the radius for the loop. This equation is very general and simple and is very similar to the equation that is used for any long straight wire, however this equation is valid only if the calculation is for strength of the current at the centre of the loop. In order to get a large field N loops are required. So, the field is now,

It should be noted here that larger the size of the loop the smaller will be the field at the centre this is because the current is far away.

In the above provided image the (a) image shows the RHR-2 to determine the direction of the magnetic field.

View All Reviews
Explain Ampere Law: How One... has been added in your library.