Explain the step by step procedure to find the area of an equilateral triangle.

Explain the step by step procedure to find the area of an equilateral triangle. 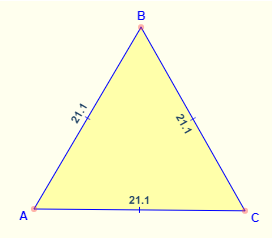 In the given triangle, A, B, C are three vertex of the triangle. The three angles that can be formed using three vertices are ∠ABC, ∠CAB and ∠ACB are all same. The sum of all the three angles are equal to 180 degree. This means the value of each angle is 60 degree. Now the area of the equilateral triangle based on the congruent sides is

. In the given formula S is the length of the congruent sides. Even s can be designed as length of one side of the triangle.

is constant and approximately the value is around 0.433. 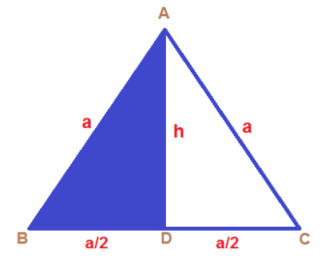 In the figure above, the sides of an equilateral triangle are equal to “a” units.

We know that the area of Triangle is given by;

In the given equation the perimeter p is given. The most straightforward way to identify an equilateral triangle is by comparing the side lengths. If the three side lengths are equal, the structure of the triangle is determined (a consequence of SSS congruence). However, this is not always possible.

Notably, the equilateral triangle is the unique polygon for which the knowledge of only one side length allows one to determine the full structure of the polygon. For example, there are infinitely many quadrilaterals with equal side lengths (rhombus) so you need to know at least one more property to determine its full structure. In this way, the equilateral triangle is in company with the circle and the sphere whose full structures are determined by supplying only the radius. The properties of the equilateral triangle can be cited as following. The area is A=\frac{\sqrt{3}}{4} a^2. Perimeter of the triangle is P=3a. The radius of the circumscribed circle isR = \frac{a}{\sqrt{3}}. Radius of the inscribed circle is r=R/2. Geometric centre of the triangle is the center of the circumscribed and inscribed circles. And the altitude (height) from any side is h=\frac{\sqrt{3}}{2} a.

Denoting the radius of the circumscribed circle as R, we can determine using trigonometry that: The area of the triangle is {\displaystyle \mathrm {A} ={\frac {3{\sqrt {3}}}{4}}R^{2}}. Many of these quantities have simple relationships to the altitude (“h”) of each vertex from the opposite side: The area is A=\frac{h^2}{\sqrt{3}}. In an equilateral triangle, the altitudes, the angle bisectors, the perpendicular bisectors and the medians to each side coincide.

Finding the area of the triangle that is inscribed within a circle. 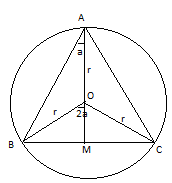 Using the Java programme, the area of equilateral triangle can be done in the sense that using special programmes. import java.util.Scanner;

View All Reviews
Explain The Step By Step Proce... has been added in your library.