How to Find the Perimeter of a Rectangle? Explain with solved example. Also Explain the properties of a rectangle?

How to Find the Perimeter of a Rectangle? Explain with solved example. Also Explain the properties of a rectangle?

Rectangle is the plane shape with the 4 sides where all the interior angles are right angle that is of 90°. In other words, it is 4 sided polygons with the parallel opposite sides. Hence, a rectangle is parallelogram and its opposite sides are required to be congruent and shall satisfy all the other properties of the parallelogram. Further, the rectangle has 2 diagonals those are equal in the length and intersects in the middle. The diagonal is square root of (width squared + height squared)

For instance, if a rectangle has width of 12 cm and height of 5 cm, the length of the diagonal is –

2 special types of rectangles are there those have stricter requirements as compared to just rectangles. These are as follows –

These special types of rectangles mentioned above are also known as golden rectangle as its ratio is golden ratio of 1.618. For instance, looking at the paintings of Mona Lisa, mathematicians noticed that rectangle that goes from her head to right hand and left elbow are in the proportion of golden rectangle.

Further, a square is special kind of the rectangle, where all sides have same length. Hence, every square is rectangle as it is quadrilateral with all the 4 angles with right angles. However, every rectangle is not a square as to be a square all the sides shall be of same length.

Perimeter is length of outline of any shape. In mathematic term, parameter of any figure is total distance around the edge of figure. For instance, square whose sides are 5 inches in length has the perimeter of 5 x 4 = 20 inches as it has 4 sides and each of them is of 5 inch in length

For finding out the perimeter of rectangle the lengths of all 4 sides are added. Computation of perimeter of a rectangle can be explained through following example –

It can be written as follows –

Length and breadth are added twice to find the perimeter of a rectangle.

Perimeter of a rectangle = 2 (length + breadth)

Properties of a rectangle

Properties of a rectangle are as follows –

The above mentioned properties can be explained through following example – 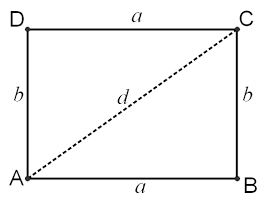 Looking at above presented figure it can be seen that opposite sides are equal and parallel. It means that DA and CB are parallel with each other. If other side is considered it can be seen that those sides are parallel too that means AB and DC are also parallel to one another. Hence, it can be said that in the above presented figure, opposite lines are parallel with each other. Further, the sides CB and DA are of same length and hence, it is clear that they are congruent. Further, the sides AB and DC are congruent to each other. In the given figure, 4 angles are there where all the angles in the rectangle are 90°. Hence, it can be written that –

It can also be found that adjacent angles here are supplementary. That is 90° + 90° = 180°. The sum of all the interior angles is 90° + 90°+ 90° + 90° = 360°. Further, diagonals of the rectangle are also congruent to each other and the diagonals bisect each other at the point of intersection. A rectangle is also called as the quadrilateral as it has 4 sides. Hence, area of rectangle = length x breadth.

View All Reviews
How To Find The Perimeter Of a... has been added in your library.