Interphase and Its Stages

What is meant by interphase? State and explain various stages involved in this process.

What is meant by interphase? State and explain various stages involved in this process.

The resting phase between successive mitotic divisions of a cell or between the meiosis divisions is called the interphase. At this phase the cell copies its DNA in preparation of mitosis. It is considered as the longest cell in eukaryote cell cycle. In this phase the typical cell spends most of its life cycle. During this phenomenon the cell acquires nutrients, occurs protein synthesis and doubles the number of cellular organelles and thereafter starts the process of cell division by replicating the DNA. The DNA appears as uncoiled chromatin because the chromosomes are not visible. The interphase is divided into three distinct stages, Gap 1 or G1 stage, Synthesis or S phase and Gap 2 or G2 stage. The purpose of interphase is to perform cell division in all types of cell at different stages of the cell cycle.

The functions of the cells varies widely depending upon which the species of the organisms divides. The neuron cell do not replicates its DNA during the process of interphase. However, it enters the quiescence or resting phase instead. The stage has been represented below in figure 1.0 as the G0 stage. The cell will exists in this stage without performing the cell division until the cell dies. Other cells like skin cells, divides a lot. To accumulate the resources to structure the new cells and replicate the DNA, the cells must pass through interphase (I) each time. A unique protein keratin which is produced by the skin cells help them to bond together after they die by creating solid surface of skin cells which protects the body from the foreign particles.

However, in bacteria the cell cycle is broken into different stages but it is not called interphase but contains almost the many similar stages including the replication of DNA. The two division of meiosis are also separated by a special interphase known as interkinesis where the DNA does not replicate. This results in the reduced amount of DNA in each cell during the process of cell division. 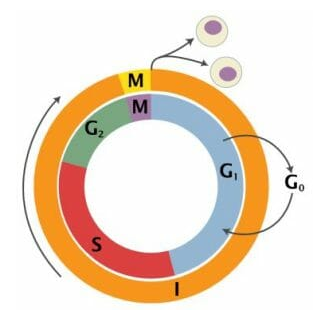 The two new cells enters the first stage of interphase Gap 1 or  G1, after the cell have finished dividing their chromosomes and the cell membrane are divided by the cytokinesis. At this stage the cells grow in size and perform its normal function and the cells replicates the organelles as per the necessity. As shown in figure 1.0, the cells very often leave the G1 and enters G0 or the resting phase as described above. The cell will continue interphase by entering the next phase Synthesis or the S phase, if it is an actively dividing cell.

The cells pauses its formal functioning during the process of synthesis. All the resources are committed to the replication of DNA. The process begins with various proteins which are unzipped by the two entwined stands of DNA. The strands which pair with each half of the DNA are created by a special protein named polymerase enzymes. This process is performed over each chromosomes which bounds together as sister chromatids by creating identical copy of each. Creating two identical copies of genome in cell the sister chromatids separated after the interphase and the main cell enters the mitosis process if it is a somatic cell. The cell will enter meiosis after the interphase if the cell give rise to a gamete. The homologous chromosomes are separated in one division in meiosis. Then the sister chromatid creates a cell with only half of a full genome. These cells enters interphase but it cannot enter the synthesis stage until the fertilization occurs with another gamete. In other words, the cell prepares cell division after synthesis.

After successfully replication of the DNA during the process of Synthesis stage, the cell enters a second gap stage known as the Gap 2 or the G2 stage. The cell replicates many important organelles and add volumes to cytoplasm during the G2 or Gap 2 stage. The mitochondria, which is called the powerhouse in animal cells, replicated to provide energy for cell division. In plant cell, both the chloroplast and the mitochondria must be replicated in order to provide the daughter cells with the organelles which has the capabilities to produce enough energy. The Gap 2 stage extends until the cell enters the cell division as “M”, as shown in figure 1.0. The sequence starts again if the cell divides through mitosis. However, the cell division process begins through meiosis, the gamete must be fertilized with more numbers of DNA and allowing the process to continue before entering into the interphase.

View All Reviews
Interphase and Its Stages has been added in your library.