What Are Consumer And Producer Surplus?

What are consumer and producer surplus? Describe in detail using examples.

What are consumer and producer surplus? Describe in detail using examples.

Producer surplus is the additional private benefits to the producers that are provided in terms of profits and the price they receive in the market is relatively more than the anticipated value. The producer’s surplus is conducted when the demand for the product is relatively high in the market while the overall supply is limited. In this instance, the producer relatedly receives a reward that is more than and the amount that covers the overall cost of production. This producer surplus is relatively reduced in time when the overall supply of the product increases or the demand from the consumer decreases in time due to the impact of the law of diminishing marginal utility. 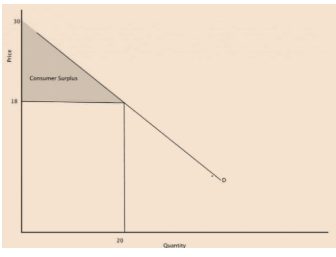 One of the major Examples for consumer surplus is the demand for water among consumers who are thirsty on a sunny day. the first glass of lemon water that is provided by the producer can have a higher amount of price, as the consumers are willing to give high value to the product to satisfy their current needs. However, after drinking one glass of lemon water the consumer starts to reduce the level of price that they are willing to pay for the same product. Hence, increment in consumption directly reduces the price of lemon water as the thirst of the consumers has been satisfied. The example directly satisfies the law of diminishing marginal utility where consumers’ willingness to pay a premium price for a particular product declines with the increment in consumption. 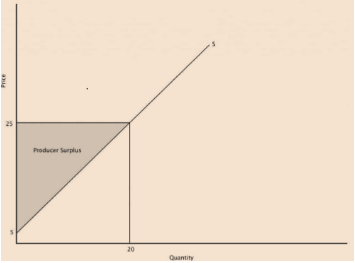 The above figure provides information about the producer surplus calculation that has been adapted for identifying the total surplus value that has been generated from a particular example. The consumer surplus also uses a similar method for detecting the overall values, where the formula is ½ base x heights. Devaluation directly indicates that the overall market price for the quantity supplied by the producer is at the levels of $25 for 20 units. However, $5 is considered the minimum price that the producer is willing to accept for single unit office goods. This directly indicates that the overall base for the producer’s surplus is at the levels of $20, where the total producer surplus amount is $200 for the example. The formula 1/2x(20)x[(25-5] is mainly used for detecting the overall $200 producer surplus, which is depicted in the above figure.

One of the adequate examples for producer surplus is coffee as it is essentially the same across all producers. However, the price of a cup of coffee can widely vary depending on where it is sold as the price for coffee can drastically increase for Starbucks in comparison to McDonald's as drinkers have a strong preference regarding where to buy the coffee drinks. Thus, the difference between the lowest available price for the coffee cup and the highest price is the producer surplus for the coffee reduces. Hence, coffee lovers are willing to pay more for the same service due to the strong preference they have for the love of coffee.

View All Reviews
What Are Consumer And Producer... has been added in your library.