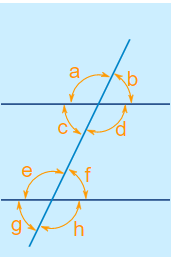 In the above figure, the corresponding angles are a & e which are equal. c & f are the alternative interior angles that is equal. b & g are alternative external angles that are equal. d & f are the sum of consecutive interior angles that are summing up to 180 degree. In order to determine the equation of parallel lines lets us consider the following problems. In order to find the parallel line to the 4x-5y=12 we have to determine the slope of the given line. Y= 4/5x-12/5. In the above equation, the slope of the line is 12 and the m= 4/5. Thus from the given solution, the equation of parallel line is Y=b+mx and all the lines that will be parallel to this one will be having slope of m =4/5. Parallel lines can be of two types- horizontal and vertical parallel lines. In spite of having so many common properties among two lines, the parallel lines will never meet to each other or will never intersect each other. The behaviour of the parallel lines are more or less like railway lines. 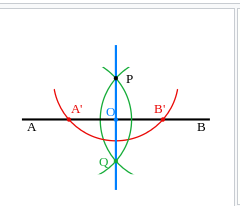 Now perpendicular lines are to be drawn in a special techniques. The first step that is needed to follow is consider straight line AB. Now pointing the point of compass on P a circle is drawn on AB to get points like A’B’. This circle A’B’ is shown as red. Now two more circles are being drawn from centre A’ and B’ having equal radius. Let P&Q be the point of intersection of these two circles as shown in the diagram above. Now joining P and Q using straight line will definitely give perpendicular where the point O is considered as the foot of perpendicular.

View All Reviews
Parallel And Perpendicular Lin... has been added in your library.