Describe the structure of human axial skeleton with the help of well-labelled diagrams.

Describe the structure of human axial skeleton with the help of well-labelled diagrams.

The axial skeleton is that part of the skeleton that consists of bones of the head and the trunk of the vertebrae. Within the human skeleton, there are 80 bones and has six parts in it, the bones of the skull, the ossicles contained in the middle ear, the hyoid bone, the sternum, the rib cage and the vertebral column. The axial skeleton is supported by the appendicular skeleton to present the complete skeleton of the human body.

Flat bones are present in the brain and the other vital organs. The axial skeleton is the medial core of the body and creates the connection of the pelvis to the body, where the appendix skeleton gets attached. Along with time, the bones lose their strength except the skull which stays stronger to provide protection to the brain.

The skeleton consists of three main section – the human skull, the rib cage and the vertebral column.

Human skull- it consists of the cranium and the facial bones. The cranium holds the brain and protects it in a large space known as the cranium vault. The cranium has its formation from the 8 bones which are fit together perfectly to give the skull its shape. The joints are referred to as sutures. In addition to this, there exists 14 facial bones which form the lower part of the skull. These 22 bones compose the skull altogether, with smaller cavities such as for the eyes, the internal ear, the mouth and the ear. The most important bones of the skull are the jaw, the cheek bone and the nasal bone. 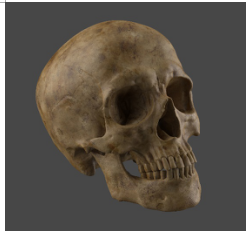 Rib cage- the rib cage has 12 pairs of ribs along with the sternum totaling to 25 separate bones. It has the function to provide protection to the heart and the lungs present in the chest area. The ribs possess a shape of crescents with one end flattened and the other end round. The rounded ends are attached to the thoracic vertebrae and, on the other hand the flattened ends converge into the sternum, in the front. The upper seven pairs of the ribs are attached to the sternum with the use of a coastal cartilage while the 8th and 9th rib is attached with the help of non-coastal cartilage. The 10th and the 11th rib are called the “floating ribs” because they are not attached to the sternum on both the ends and float freely on one end. The length of each rib increases till the 7th rib and decreases gradually till the 12th rib then after. 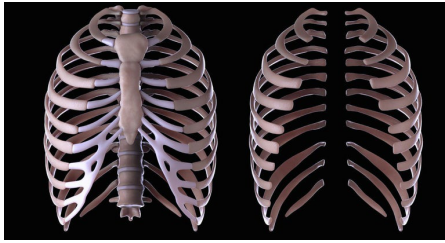 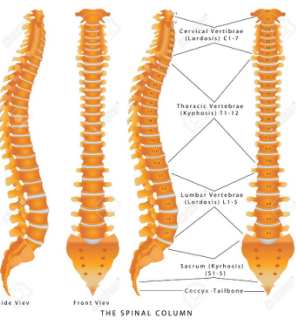 View All Reviews
Structure Of Human Axial Skele... has been added in your library.