Anomeric Carbon: There might be occurrences in the organic chemistry where a carbohydrate happens to be existing in a compound in the form of the cyclic form or the acyclic form. When the cyclization is occurring during the existence of the carbohydrate, the carbonyl carbon happens to be transforming into a new stereo-centre. This process of cyclization happens to cause the formation of two new diastereomers which often differ in the position during the attachment of the groups by forming a new stereo-centre. Thus, the new stereo-centre formed as a part of this process of cyclization has been referred to as the anomeric carbon. This can be clearly described with the following illustration as below: 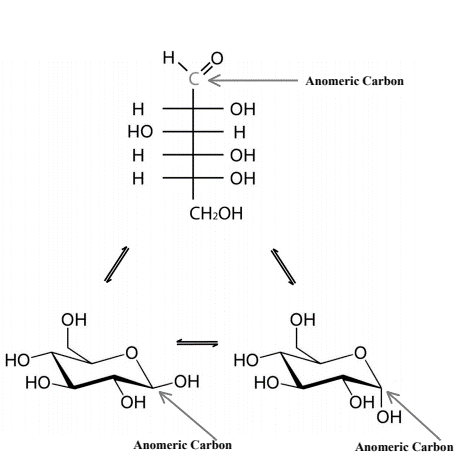 There might be occurrences that in the cyclic form, the anomeric carbon is in such a form that it can be found to be next to the oxygen atom as per the pyranose of the furanose ring. However, at the same time, the opposite side of the carbon happen to carry the acyclic CH2O group. As per the cyclic sugar form, it can be declared that the anomeric carbon is in the form of the straight chain structure according to the carbonyl group. In this kind of structure, the linear glucose structure can be declared to be in the form of the following structure:

The anomers are mostly declared as the cyclic monosaccharides or glycosides which are considered as epimers and happens to differ from each other. This is referring to the configuration where the presence of C-1 is seen and at the same time the aldoses remain at the configuration of C-2 when these are found to be in the form of ketoses. These epimeric carbons in the anomers are known to be in the form of the anomeric carbons having anomeric centres.

Identifying the carbon atom as the anomeric carbon in glucose: When any glucose atom is found being converted to any other form, like the pentamethyl ether as per the excess reaction with CH3I and AgOH, there is a formation of two varied isomers that are isolated from each other. There is another chance where the information about the acid catalysed hydrolysis of the pentamethyl ether derivatives are capable of providing the compound of tetramethyl derivate which can be oxidized with the help of Tollen’s reagent and also can be reduced with the help of sodium borohydride. This is a probable characteristic of an aldehyde. Therefore, the structural elucidation of glucose can form a better example in this case where the anomeric carbon and its presence can be justified. As the example presented as above, it needs to be identified that the stereogenic centre can be created in such a way that the aldehyde gets represented to the deactivation of the pentamethyl derivative. There has been a simple solution about this situation where there can be occurrences of the conversion of the open aldehyde structure can form the cyclic structure and convert into a cyclic hemiacetal that helps in the formation of gucopyranose. The linear aldehyde present in the compound is thus moved to the sides and there is a formation of rotation about the C4-C5 bond which brings about the C5-hydroxyl function and at the same time it helps in the representation of the functions that are closer to the aldehyde carbon. If the structures of the six membered hemiacetal is formed off for a distinct view, then the hemiacetal carbon atom or the formation C-1 can be represented in the form of the new stereogenic centre which would be considered as the anomeric carbons and the α and the β isomers can be regarded as the anomers.

View All Reviews
The Term Anomeric Carbon: Whic... has been added in your library.