What Is The F Distribution? Discuss Its uses And Characteristics

It is equally important to understand the F statistics in order to compute the F test Distributions. The equations that are commonly used for the computation of F Statistics are as follow:

The key properties of F distribution are as follows:

In terms of statistics, the application and usage of one-way variance, which is also called as one-way ANOVA, is a type of statistical tool that can be used for the purpose of comparing means of two or more samples with the help of a F-Distribution. The technique can be used for the purpose of numerical response data, the variable “Y”, that is almost one variable and numerically which is usually the categorical input data, the “X” is always one variable, hence it is called one-way.

An F test is generally used for the purpose of testing that variances of the two populations are equal. The test that would be applied can be both in the way of two-tailed test or a one tailed test. The application of the F Test is done in order to check whether the variances between the two populations are equal or not. The one-tailed version only tests in one direction, that is, the variance from the first population is either greater than or less than (but not both) the second population variance. On the other hand the F-test distribution is also used for the purpose of checking the significance of the overall model and data whether the same can be statistically applied or not.

The characteristics of F distribution are listed below:

Examples of the F distribution

As F distribution represents continuous probability distribution, hence, it can be defined for infinite number of different values. This distribution is used for various types of applications, such as, hypothesis testing regarding the equality of two population variances and evaluating the validity of multiple regression equations. Household income is an example of positively skewed distribution. For example, in a particular region, half of the total households have incomes below $50000 and the other half have income more than $50000. Hence, the median income is around $50000. $0 is the smallest possible income for households with less than $50000 income and for households with more than $50000 income, the income value can go up to any amount. Hence, there is a huge imbalance in the incomes between the two groups and it pushes the mean substantially higher than the median, say, $120000. 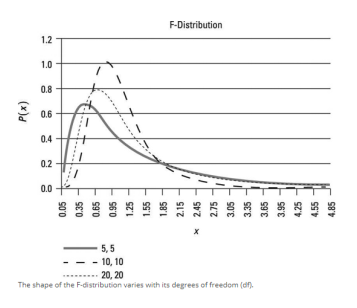 Thanks for your assistance i got very good marks. I will recommend other students to your website for assistance.

Amazing assignment, Assignment help has the best tutors around. They always have assignment completed in time Fram required and of the best standards.

The assignments are always of the highest quality and they always deliver the assignment in the correct time frame.

Thank you very much. Great work and quick turn around time. Really appreciate it very much.

View All Reviews
What Is The F Distribution? Di... has been added in your library.