Mathematics has the use of percentage. Percentage is the number or ratio that we use to express something as a fraction of total amount, which is 100. In the field of mathematics, we sue the sign ‘%’ or percent sign to denote or define the percentage of something. Often, people use the abbreviations of the percentage, which are ‘pc’, ‘pct.’ or ‘pct’ to denote the percentage. The percentage is a pure number or also referred as the dimensionless number. The examples of some percentage are, 50% or fifty-percent, which is equivalent or equal to the 50/100 or the ratio is 50:100. This also can be defined as the 0.50. When in real life people have to express something as a part of something along with the proportionate part of the total object or material, people use the term percentage. Assume, 40% students of a class are female thus, this clearly means that if the class has a total of 100 students, then 40 students are female out of those 100 students. If the total number of students in the class are 500, then simply the number of female students in the class are 500 × 40/100 = 200 students. The normal or common use of the values of percentage are used between the values of 0 and 100. However, there is no restriction by mathematics that, the values have to be in between the 0 and 100. Percentage can be expressed with the help of other values too. In case of comparisons and percentage changes, it is very common to denote the percentage as the 115% or -30%.

Percentage error is very common mathematical term that people use in their regular life. Let us first look at a scenario. In carnivals or schools, somet8imes people play a game that participants have to guess that how many balls are there inside a bowl or bucket. The person, whose guess is the closest to the actual number of the balls that are inside the bucket or bowl, wins the game. Here the winner is determined with the help of the percentage error. Hence, the percentage error is the measured difference between the number that people estimate and the actual number present in the situation. The error is calculated when the difference is compared to actual number with the help of the percent format.

From the above equation, it is very clear that to find the percentage error, first we have to measure difference between the estimated answer or calculated value and the actual answer or theoretical value. Then we have to divide the measured difference with the actual answer or theoretical value. Then the result need to be multiplied by the 100% percentage. This will give the result as the percentage error. While calculating the percentage error, if the resultant value is near zero or very close to the number zero that means the calculated value is very close to the actual value. The lesser value of the percentage error denotes the accuracy of the estimation. The equation has some straight lines at the beginning and at the end of the equation. These straight lines are known as the modulus and the purpose of these straight lines are to take the absolute value of the calculated result. In simple words, the absolute value is when the calculated result is in negative form, regardless of the negative sign we have to take the positive value. So any negative number inside the modulus sign or absolute sign has to be treated as a positive number.

The following section is the detailed discussion of the steps involved while calculating the percentage error.

Step 2: In the next step, we have to subtract the exact value form the value of the approximation. In the above example of apples, we have to subtract the number 10 (actual number) form the number 9 (approximate number). In this example, the calculated result is 9 – 10 = -1. This difference is referred as magnitude of the measured difference in estimated value and the actual value. Form the difference, it can be visible that how much far off the result is from the expected result. 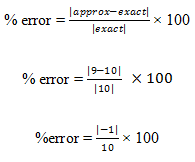 Step 3: After calculating the result, it is possible that the top value of the fraction is coming as negative. Here, we have to take the absolute value of the result that is coming in top. We are using the modulus sign or the absolute value sign hence; we can easily discard the negative sign. Thus, here the value -1 will simply become positive which is 1. However, if the result comes as a positive form then we do not have to change value as absolute value only converts negative values to positive values. Assume, the person guessed that the number of apple were 12. Hence, the difference is now 12 – 10 = 2. In this case, the result is positive, hence we have to leave it as it is. The reason for taking absolute value is, sometimes we do not care about the direction of the estimation however how much far the estimation is from the actual value.

Step 7: The next step should be to be sure that the calculated result is absolutely correct or not. Sometimes people commit mistakes while dividing and swapping signs. In addition, these mistakes may lead the result to minor errors. The best way to be sure is to go back and check the answer. In this following example, we have to make sure that the guessed answer 9 apples have an error by 10% of actual values of apples. So the back calculation goes like this, 10% (0.1 = 10%) of the total apples is 1 (10 × 0.1 = 1). So, we add this to the estimated value the result is 1 + 9 = 10 apples. Thus, this is the confirmation that the estimation of the number of apples was off by the number of 1 apple which is eventually the 10% of the total value of the apples.

Step 2: as we are using the absolute value sign, then the negative sign have to be discarded, 0.02 is the error.

So from the above example, it can be concluded that the percent error that the person made was by 0.74%.

View All Reviews
What Is Percentage Error and H... has been added in your library.