Referencing Styles : Harvard | Pages : 9
Task: The learning outcomes that are assessed by this coursework are: 1.Describe and evaluate fundamental formal methods concepts 2. Analyse and critically review the role of formal methods in the software life cycle 3. Critically evaluate the role of tools and methods supporting formal software development You are required to a) Produce a model of each of the following machines together with an appropriate set of documentations which includes: the specification of the models, the models t ...

The learning outcomes that are assessed by this coursework are:

2. Analyse and critically review the role of formal methods in the software life cycle

You are required to

a) Produce a model of each of the following machines together with an appropriate set of documentations which includes: the specification of the models, the models themselves, design decisions and their simulation and test cases (using JFLAP):

i) Machine N for dispensing a number of snacks.

ii) Machine M for dispensing a number of snacks.

iv) A combined P-N machine in which a number of snacks are dispensed after the drink. Note: payment for machine P is separate from machine N.

v) A combined P-M machine in which a number of snacks are dispensed after the drink. Note: payment for machine P is separate from machine M.

vi) A combined M-P machine in which a drink is dispensed after a number of snacks. Note: payment for machine M is separate from machine P.

LO1 Describe the meaning of a finite state machine

LO2 Transformation of one formal description to another

a) Describe informally the languages accepted by the finite state machines shown below. 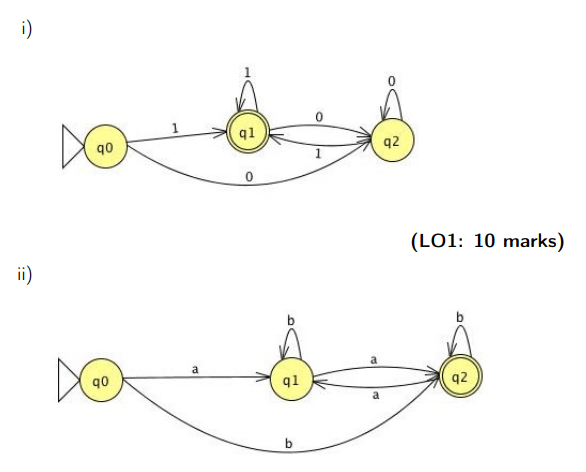 b) The following machine is deterministic finite state machine over the input alphabet {0; 1}.

i) Construct the minimisation tree for this machine.

ii) Deduce the minimal deterministic finite state machine equivalent to this machine. Note: you should also remove unreachable states if any.

Worked great and helped me with my assignment. I would recommend your services to anyone needing it.

thank you for all. though it was not very smooth at first, however, you all tried your best to work on it to your best abilities. appreciate much

Awesome, work. I was pleased with the analysis for the discussion regarding the Anti-trust Activities by companies

View All Reviews
CTEC5723 High Assurance System... has been added in your library.