Referencing Styles : Harvard | Pages : 137
Question: You should work individually for this coursework and you should have all the required hardware to build your prototype yourself. You will need to construct an Arduino ESP8266 based prototype to implement an Internet of Things application which will perform as the system described in this specification document. You will use 2 Arduino boards, one ESP8266 module, one LED, resistors, wires, diodes and opto-couplers to implement a prototype that 1. implements a WiFi soft-access point ...

You should work individually for this coursework and you should have all the required hardware to build your prototype yourself. You will need to construct an Arduino ESP8266 based prototype to implement an Internet of Things application which will perform as the system described in this specification document.

You will use 2 Arduino boards, one ESP8266 module, one LED, resistors, wires, diodes and opto-couplers to implement a prototype that

1. implements a WiFi soft-access point via the ESP8266 module and provides a webpage interface to the workings of the system.

3. Makes sure the voltage interface between and Arduino is appropriate.

4. Keeps the LED operational as long as at least the ESP8266 and one of the Arduino boards are powered and a button on a webpage implemented by the ESP8266 is pressed by the user.

5. Only one Arduino can control the LED at any time.

6. The operation of the LED is given as per table 2.1. In other words, when the LED is operational, it has states and it must continuously follow them from 0 to 11 and back to 0 again.

What should be submitted

You will need to write a report, build a prototype and write the software for the system that implements the here given specification. You must submit your report, schematic diagram, image or a video of the working breadboard prototype and the complete C code for all three µ-controllers via the corresponding submission journal on the Blackboard shell of the module.

During the demonstration of your work, your implementation will be aggressively tested and you will be expected to explain the workings of your system. Demos allow us to gauge authorship and as a result a mark of 0 will be recorded if you do not present your work regardless of the state of your submission. 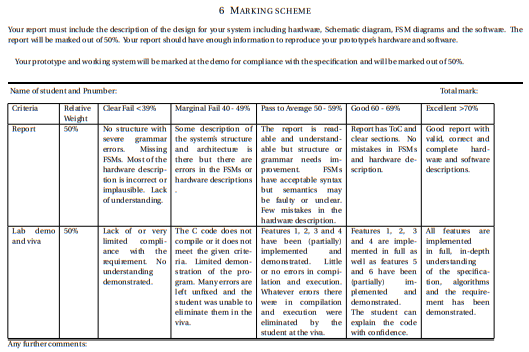 View All Reviews
ENGT5108 Fault Tolerant IoT Co... has been added in your library.