A Brief Description Of The Menses Phase

Write a brief description of the menses phase.

Write a brief description of the menses phase.

The menstrual cycle is usually counted from the first day of one period in a month to the first day of the next month however, it is not same for all the women and different women experience different cycles and it is not necessary one might have to get their period on the same date but it sometimes might differ as well. During the early years when menstruation starts it has been seen that long cycles are common. With age the cycle shortens and becomes regular. Majority of the females get their first ever period when they are young girls and between the ages 11 to 15. By this stage the females develop other sexual characteristics as well like development of the breast, pubic hair and many more.

This menstrual cycle is considered to be a complex cycle and is controlled by several different glands and also controlled by the hormones which are a production of these glands. Hypothalamus, which is a brain structure, makes the pituitary glands to make or produce some chemicals that make the ovaries produce sex hormones, progesterone and oestrogen. The menstrual cycle is said to be a biofeedback system that state that each gland and structure are affected by the actions of each other.

There are four main and key phases of the menstrual cycle which are the following: 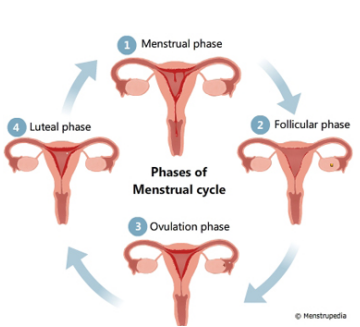 Menstruation is known as the elimination of the endometrium which is the epithelial layer which is present inside and along with the mucous membrane of the uterus from the female’s body through their vagina. The menstrual fluid contains mucous, the epithelial layer of the uterus which are the endometrial cells and blood. Period takes place every month in the body of the females and the average length of this is between four days and a week. During periods, as the females bleed profusely, in order to absorb the blood that comes out of the vagina tampons or sanitary napkins or pads are used. It is necessary and essential for females to change tampons and pads at short intervals. Every female should use sanitary napkins as it is said to be risk free in comparison to tampons as the usage of tampons can increase the risk of toxic shock syndrome which considered to be a very rare illness. 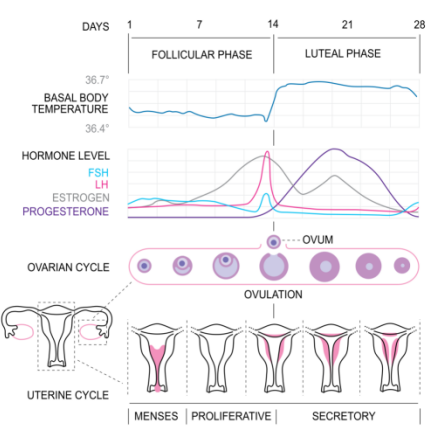 The follicular phase begins on the first day when females get their periods and the follicular phase stops with ovulation. The pituitary gland of the female releases a hormone which is called follicle stimulating hormone (FSH). The FSH stimulates and activates the ovary to produce about five to twenty follicles which are tiny cysts or nodules which bead on the surface. Each of the follicles contains an egg that is immature. Generally, an egg is matured from the follicle while the other eggs die. The growth of these follicles helps in stimulating the epithelial layer of the uterus of the females in order to make it thick in order to prepare the body for pregnancy.

Ovulation is the process where the mature egg is released from the surface or exterior of the ovary. This mainly occurs during the mid cycle which is around two weeks or before the starting of menstruation cycle. Throughout the follicular phase, the follicles that are developing cause the rise in the level of the hormone oestrogen. The rising levels are recognized by the brain structure, hypothalamus and releases a chemical which is called gonadotrophin-releasing hormone (GnRH). This hormone makes the pituitary gland to produce high levels of FSH and luteinising hormone (LH).

In two days the ovulation starts by the raised levels of LH. The egg is then funneled into a tube which is known as fallopian tube and funneled towards the uterus by waves of tiny, hair-like projections. The typical egg has a life span of about twenty four hours unless and until during this time it comes in contact with a sperm otherwise the egg dies.

When any female or a woman wants to have a baby they can improve their chances of becoming pregnant if they come to know about the fertile window or the ovulation in the menstrual cycle. 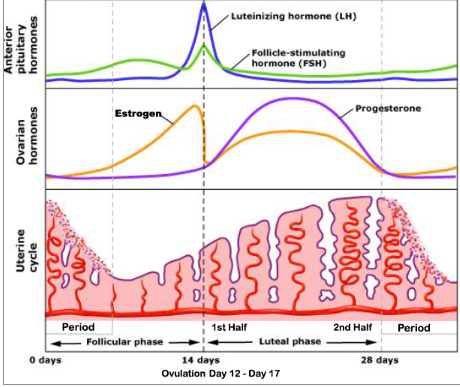 During the phase of ovulation the eggs in the ovary bursts out from the follicle however the ruptured follicle states on the exterior part of the ovary. For the coming two weeks the follicle transforms into a certain structure which is called corpus luteum. The structure releases the hormone, progesterone with small quantity of oestrogen as well. The combination of these two hormones, progesterone and oestrogen helps in maintaining the epithelial layer o the thick lining of the uterus and wait for a egg which is fertilized to stick.

If the fertilized eggs stick to the lining or the epithelial layer of the uterus then it produces the necessary hormones that will help in maintaining the corpus luteum. The hormone that is secreted includes human chorionic gonadotrophin (HCG), this is the hormone that is detected when urine test is done in order to find pregnancy results. The increased level of progesterone are produced by the corpus luteum continuously in order to maintain the epithelial layer which is present in the uterus. If the female is not pregnant then the corpus luteum dies generally round the 22nd day in the cycle of twenty eight days. The decrease in the levels of progesterone causes the epithelial layer or the thick lining of the uterus to go or fall away. This is called and knows as menstruation and this cycle is again repeated.

View All Reviews
A Brief Description Of The Men... has been added in your library.